NetSuite: Hyperbole and the credibility gap 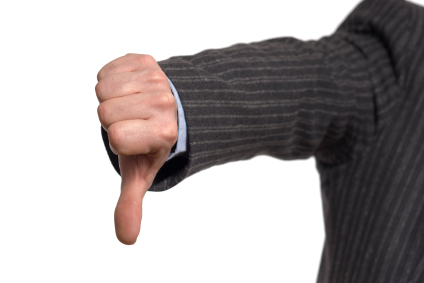 Let’s face it, enterprise software is pretty dry stuff. Still, sometimes drama creeps in through the cracks, even if it’s a bit lame and requires decoding to understand.

Last December, NetSuite sponsored the Sapience conference, which included a shoot-out between its own enterprise software and SAP’s Business byDesign. Some observers thought the event was a set up against SAP, which was not in attendance. Blogger Dennis Byron raises these issues on the Seeking Alpha website:

[H]ere are some questions that could help us decide whether the press release described a fair fight or an ambush:

On the other hand, two observers who were present commented that NetSuite won the contest fairly. Respected blogger, Jon Reed, and independent analyst, David Dobrin, each responded to the Seeking Alpha post by favoring NetSuite. I know both these guys personally and trust their judgment to report events accurately.

It is true that the people giving the demos were not professionals and that an artful and committed BuyD person would have brought out its virtues more effectively than the college student who did it at the shootout. But I think NetSuite won fair and square.

Jon is a bit more reserved in his evaluation, but does not contradict David’s view:

A more potent question is: was the “shootout” itself a fair fight? As an attendee, I must say I was pretty surprised to see that it was indeed a pretty fair presentation….

[S]ome of the press releases I saw after the shootout seemed to proclaim this as a resounding victory for NetSuite, which was not what I observed.

For the sake of argument (whether true or not), let’s give NetSuite the benefit of the doubt and say they won the competition and that it was a fair contest.

[Update 1/9/10: Considering all the facts, it clearly was not a fair contest.]

Now, on to the main point. 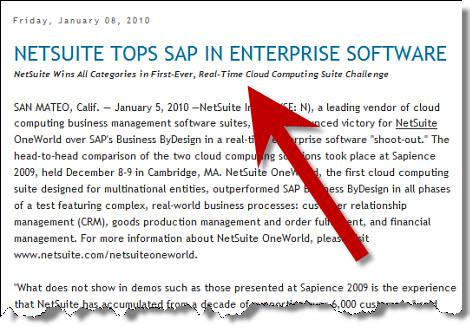 The title deftly implies that on an overall basis, NetSuite is “better” than SAP in general. The release title leaps away from the shoot-out competition into a broader realm of generic contrasts and implications regarding SAP and NetSuite products. Given the nature of enterprise software, such implications are nonsensical hyperbole.

In the enterprise, “tops” is a function of software fit relative to a specific customer’s business needs. In the absence of context, it’s not correct to issue a blanket statement saying that one legitimate company is generically tops over another.

Private advice to NetSuite: Guys, you know that claiming (or even implying) world domination over SAP makes no sense because you’re an itty bitty company compared to them. Nonetheless, you have a great product that fits a particular niche and have every reason to stand tall and be proud based on the real merits of what you sell. It’s time to give up the cheap shots because they make you look…well, like a cheap date.

Private advice to SAP: Man, how many times must we have the same conversation? These upstart companies are aggressively kicking your collective marketing butt with sheer pluck, scrappiness, and creativity. Yes, I know you’re much larger and must consider your reputation, but maybe it’s time to take off the suit and tie and fight back. You know, sometimes gentlemen and ladies lose to street fighters.

What do you think about enterprise software street fighting? Leave a talkback comment and share your thoughts.

[Thanks to fellow Enterprise Irregular and Enterprise 2.0 superstar, Susan Scrupski, for bringing the press release to my attention. Image from iStockPhoto.]

4 responses to “NetSuite: Hyperbole and the credibility gap”