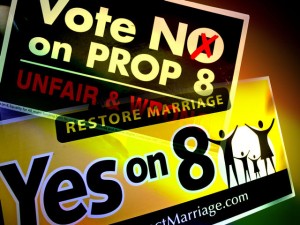 There has been quite a bit of commentary about the decision by a Federal judge to allow video of the ongoing Prop 8 constitutionality trial to be posted on YouTube, a decision that has been stayed by the SCOTUS with a final decision due today.

In the meantime, one message is clear: Banning the public from viewing a trial on gay marriage suggests how loosely we should interpret the word “transparency” as it’s applied to government and certainly the judicial system. The government can offer citizens Web 2.0 toys to play with all it wants, giving them the opportunity to have their voices heard via public comments, and the like. But banning video of a landmark court case, whose implications will undoubtedly impact the lives of most Americans, at least by association, shows quite clearly how very behind the curtain the rest of us still are.

Much of the debate has centered on the issue of transparency in the judicial system and potential adverse effects on testifying witnesses but I have a different reason for opposing the move to post court video on YouTube. The government, whether it be federal, state or local, should not be in the business of singling out a single company for benefit or financial gain, whether it be direct or indirect financial gain.

The decision to post video on YouTube does just that; rather than making the video freely available in a range of formats the judge in this instance singled out a single hosting provider that expressly prohibits the downloading and redistribution of content, In order to distribute the Prop 8 court video someone has to distribute it as a branded YouTube video in the embedded YouTube player console.

This record of this court case should not become the property of a single video hosting provider, it is the public record and if the court is intent on making the video of the court proceedings available they should do so in an non-proprietary video format hosted by any service provider that wishes to host it, and/or downloadable from the court website directly.

Government should never be in the business of picking winners and losers in business, there’s been far too much of that going on lately and the results speak for themselves.