What’s Up at RealNetworks? 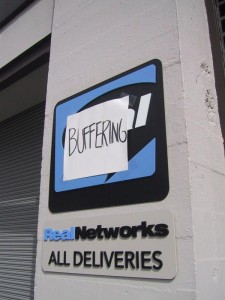 Lots of activity in $RNWK this morning as the share price is up ~16% at the time of this post – following yesterday’s announcement that founder and longtime CEO Rob Glaser is stepping down.  Investors are clearly seeing this as a path to the sale of the company as Canaccord Adams upgrades them on buyout speculation and the StockTwits stream agrees.

Looks interesting at less than 1X revenue and 2X cash – key question is whether a deal is imminent, or whether the board has simply decided ‘it’s time’.   If you believe the latter, it might make sense to stay on the sidelines until the noise settles down a bit.  Per Silicon Alley Insider:

“RealNetworks hasn’t had much of a business to get excited about in a long time. The company once led the streaming video world, but got its butt kicked over the past decade by Microsoft and later Adobe. Meanwhile, it is an also-ran in streaming music.”