2010 Prediction: Demand for Sourcing and Supply Chain Consulting Strikes Back 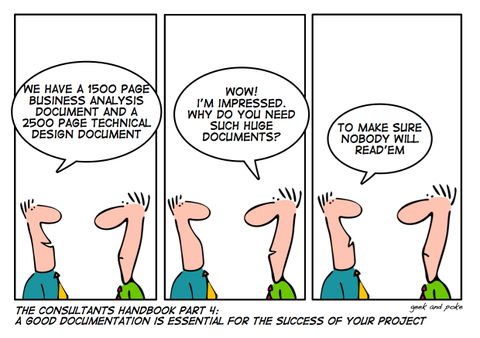 Image by Geek and Poke

Earlier in January, I offered up twelve predictions for 2010 and said that I’d tackle them in more detail in the coming weeks. The first on my list is one that I’ve been thinking about extensively over the last few months, and gathering facts to support. And that’s the notion that demand for sourcing and supply chain consulting services will rebound materially in 2010 (as will the payment of invoices for work invoiced in Q409, much of which I know is lagging at some firms). Before getting into the nuances of this prediction — as well as the specifics about what types of services are most likely to benefit — it’s worth taking a step back and talking about the services climate earlier in 2009, a time when many companies “tossed the bums out.” This was not because they were unhappy with the results and savings they were getting from services providers, but because forecasted volumes (not to mention current inventories, in certain cases) had fallen off a cliff, and fewer companies could justify having large consulting teams onsite to drive savings efforts.

The result was a period of feast or famine for various firms providing such services. Some had a decent-to-excellent 2009, in many cases owing to a stellar second half, when spend began to ramp back up again and companies loosened their purse strings for consultants. Others, including Ariba, faced a challenging services climate throughout most of the year, and substantially cut back their practices in the areas of strategy and process work (not to mention category sourcing). Competitors like AT Kearney — and often, AT Kearney Procurement solutions within the broader ATK umbrella — were happy to pick up the expert slack. They hired a number of key individuals from Ariba, including Mark Clouse, Ariba’s former VP of Spend Management Services, who had spent over a decade running consulting groups and programs at FreeMarkets and Ariba.

Ariba was not alone in facing a challenging services time, though; many boutique firms I know had some of their worst years on record. A number who worked on contingency had to write off hundreds of thousands — even millions — in revenue from bankrupt clients; others found it difficult to attract new clients. Still, some firms thrived, and even the turnaround firms (e.g., Alverez and Marsall) started building up their own procurement and supply chain consulting arms, attracting top talent through compensation packages for non-partners more directly tied to actual billings. Moreover, 2009 saw the return of the Big 5 consulting practices from the accounting firms (e.g., PWC, KPMG) who started to build new practices in the area, acquiring talent and firms (e.g., PWC’s acquisition of Alaris in December).

Fortunately, from a firm perspective, I believe there will be plenty of work to go around in 2010. There are a number of reasons for this. To start, CFOs are now getting more directly involved in cost reduction, either taking a personal oversight role or more closely looking over procurement’s shoulder. Finance’s involvement will mean not only larger budgets for consultants, but a willingness to sign on for contingent models (of which, for one reason or another, procurement organizations are often more leery). Finance’s involvement will also bring a willingness to consider a full spectrum of procurement-outsourcing services, from more traditional basic category sourcing to the broader category management, systems, and purchasing-execution services offered by traditional outsourcers…

One response to “2010 Prediction: Demand for Sourcing and Supply Chain Consulting Strikes Back”