These four concepts makes humanity move forward. They’re basic requirements for every day work as well as for Big Important Decisions, hence nothing to take lightly. Indeed, if possible to grasp, sort, handle, and model efficiently we would all be better off. So lets have a closer look.

Well put, but it also has the kernel of something more, so let me rephrase that by turning the dependencies upside down (keep in mind that “objects” can be tangible or intangible): 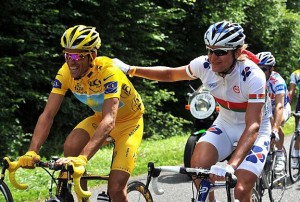 But do not for a moment be fooled by the philosophical whimsy, this touches, no, it is the very essence of any software system or management practice that purports to support the future of organisations.

Do it right and the results will be important, keep on doing it wrong and one shall become the ‘lanterne rouge‘.

Where we go wrong: Thanks to habits developed under old technologies we mix Presentation and Representation, mash logic and information, for the same object. Mostly into documents, forms and accounts, but also into the business objects of large Enterprise Systems.

How to better: Information should be Representation only. Take the information and add logic for Presentation separately when needed. Kill the notion of documents, forms and accounts. We are not limited to scrolls, quills and ledgers any more.

This we call a “coffee mug” and you have never seen such a thing: The “teacher” fills it with coffee (or tea or water), holds it by the handle in her hand and moves the rim to her mouth while tipping it. Voila you can now use the “coffee mug” with confidence to sip or drink the liquid of choice, you have the knowledge.

This is how children learn, this is how Plato defined knowledge.

Where we go wrong: The problem starts with the information as the “holders” of information keeps more than one object. A letter from the bank holds information about you, your house, the bank, the banks offices, your account and more.

Precisely relating a suitcase of different objects to another bag of other objects is not possible. Hence the knowledge is lost in the (bad format of) information.

How to better: One-to-one only. Single model objects representing single unique real world (tangible or intangible) objects only. Then relate these precisely in the model as they are in reality. That would lower model and system complexity tremendously as well. Reality has the lowest possible complexity. We create unnecessary complexity by using bad models.

Over time we (might) become wise for one simple reason: We accumulate knowledge and as humans we’re inherently good at recognising patterns. First it takes the form of intuition or gut feeling (male term for intuition), then with luck, one is able to understand and approach the feeling with structured thoughts putting words to the reaction, understanding it, and wisdom emerges.

Where we go wrong: Recognising patterns require a clear view, and lowest possible complexity. But as we can see, most efforts to structure information and add knowledge has failed and thus messed up the path to wisdom. So we most often end up being wise in areas of less commercial importance and thus less structured. Typically life issues are were wisdom emerges, for sure important, but for the overall benefit of mankind it would have been nice if wisdom could be a part of our value-creation life too.

How to better: Fix the two first issues and the rest follows.

Why would we only listen to music in the living room or concert hall? Walkman ensued.

Where we go wrong: Yet again, mashed up objects equals irrelevant and rather useless relations leading to a less than clear material to work with and innovation suffers.

How to Better: Simple, as above; fix the two first issues and the rest follows.

Represent real world objects by unique and single objects, then relate these precisely, just like in reality.

Those changes alone will automagically rectify the issues and better models will ensue. And with truer and more direct models of reality we’ll all be much better off on all levels – wisdom and innovation included.

One response to “Information, Knowledge, Wisdom, and Innovation”