Does a picture paint a thousand words? 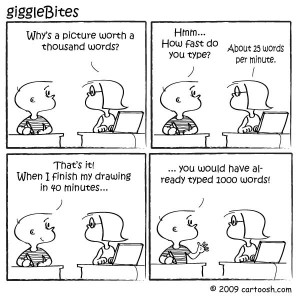 I’ve been spending a lot of time in the last few weeks thinking about the basics of presentations combined with how you get the positioning and messaging for your product right.  To help I’ve been reading Jack Trout‘s In Search of the Obvious, a marketing book which is all about making sure you focus your strategy on what is simple and obvious rather than clever and ingenious.  We are bombarded by clever and entertaining advertising these days, but does it really sell the product?  I’ll do a review of the book here shortly, but it’s good.

So two things jumped out at me this week.  The first was a section in Trout’s book about the proverb “A picture paints a thousand words”.  The second was a post highlighted to me by @solobasssteve from Mike Smith – “Narrative is important in technical presentations”.  It reminded me telling a story is important in any presentation.  Trout, on page 129-131 of the book suggests that actually, the ear is more important than the eye in picking up the message, and that this saying from Confucius is a popular but misguided preconception most of us, particularly in marketing, have.  He rightly points out that if you took away the words or sound from most print or TV adverts, you wouldn’t know what was going on, but if you just left the words or sound alone you would probably get the message.  That’s not to diminish the power of a good visual to support your case, but he has a point.   He amplifies the point with some analysis of past positioning programmes, none of which were exclusively visual, and by saying they went back to the original Chinese characters and found that a better translation was “A picture is worth a thousand pieces of gold”, not words!

Now that’s a great revision of the message, but I decided I wanted some corroboration and a good link for this post, so I started Googling to find any further references.  Well, confusingly, I couldn’t find the saying amongst any of the lists of Confucius quotations.  Then I found the Wikipedia entry which says:

“It is believed that the modern use of the phrase stems from an article by Fred R. Barnard in the advertising trade journal Printers’ Ink, promoting the use of images in advertisements that appeared on the sides of streetcars.[1] The December 8, 1921 issue carries an ad entitled, “One Look is Worth A Thousand Words.”

Another ad by Barnard appears in the March 10, 1927 issue with the phrase “One Picture is Worth Ten Thousand Words,” where it is labelled a Chinese proverb (畫意能達萬言). The Home Book of Proverbs, Maxims, and Familiar Phrases quotes Barnard as saying he called it “a Chinese proverb, so that people would take it seriously.” Soon after, the proverb would become popularly attributed to Confucius.”

The irony that this was actually a marketing slogan to begin, complete with a fabricated narrative history to provide authenticity is priceless.  I now expect Stephen Fry to use this in an upcoming QI, but this popular myth  amplifies the two points.  Actually, when it comes down to it, the words are the message, and they can be amplified by a good supporting, narrative story.