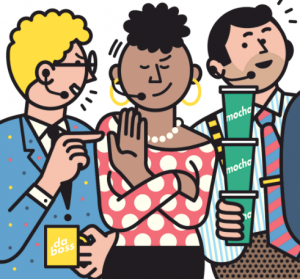 There’s an interesting article in the January/February issue of Harvard Business Review by Matthew Dixon and some associates from CEB, a consulting group, about customer service agents that I think is worth a look.

Most of us understand the phenomenon that new customer service channels such as social, email, knowledge bases and the like have left the service agent with harder problems to solve. Those channels are here to stay because they cost pennies to solve problems, when they work well, but conventional agents can cost many dollars to resolve an issue. So there’s a decided bias for self-service where possible.

But as I wrote in “Solve for the Customer,” we need to ensure that there are graceful transitions from the channels to agents or we risk a backlash. As a matter of fact, some amount of backlash in the form of irate customers confronting agents is par for the course, but how are we preparing for this?

The HBR article suggests that we’re mis-staffing the call center for today’s activity. I say mis-staffing rather than anything else because the staffing model is simply old; it’s built on the assumptions of another time that no longer reflects service realities. The article summarizes a study of over 1400 service agents from diverse industries and many countries and its conclusions are interesting to say the least. It groups agents into seven different buckets and characterizes them and in this demonstrates the mis-alignment of skills to need.

The predominant type of agent in the study is labeled The Empathizer and they make up 32 percent of agents covered in the study. An Empathizer says the report, “Enjoys solving others’ problems; seeks to understand behaviors and motives; listens sympathetically.” That’s fine and harkens back to a time when all sorts of easy and hard problems visited the call center. But the agent type that’s more effective for today’s need is labeled The Controller, which the study describes this way—“Outspoken and opinionated; likes demonstrating expertise and directing the customer interaction.”

Unfortunately, Controllers make up only 15 percent of agents in the study and while they are ranked #1 in effectiveness, they are ranked #3 in service manager desirability. The reason is simple. Controllers, like good sales people, go off script; they relish their freedom to roll up their sleeves and solve a problem and they aren’t terribly enamored of following all the rules set down in a manual.

Here’s the rub: by the time a do-it-yourself customer gives up on tracking a problem through a maze of sometimes contradictory or confusing information on the Web, they aren’t likely to want a long empathetic encounter with a service agent. They’re much more likely to want someone to FIX their problem, pronto. That’s where the disconnect happens. Controllers take charge and provide comfort of quick resolution with little fuss that empathizers, despite best efforts, might not.

What to do? The article suggests that we get more controller types into the service mix but that suggests a change of mindset in the hiring process and even in the job description. If you advertise jobs for self-starters or other similar descriptions, you have to be able to let them, well, you know, self-start. That’s a big effort for managers used to controlling and scripting the action but it’s increasingly apparent that the change is needed.

There are approaches for making changes in the service department suggested in the article and I encourage you to read and consider them though I won’t summarize them here. But in an age of job depletion due to automation it’s great to see this article because it pinpoints one area where human interfaces are needed and also a mode of working that shows how technology can augment human actors.