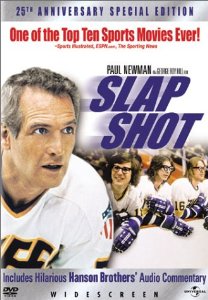 A certain vendor product-type (who I know would prefer to go unnamed in this context) recently reached out to me. This was not to give me the skinny on a new solution release; no, his questioning and probing was on a far more important subject: had I seen the Paul Newman classic, Slap Shot? “No,” I responded, but quickly went to Netflix and added it to the queue.

I just finished watching it. For all you sports fans out there, the flick is an absolutely classic. But even those who abhor hockey — not to mention macho competition in general — stand to learn quite a bit from it. It even has lesson on procurement (more on that in a minute). As plots go, this one’s really quite simple: Paul Newman stars as Reggie Dunlop, a hockey player and coach of The Chiefs, a second-rate minor-league professional team whose owners are about to cut bait at the end of the season. The entire action takes place amidst the backdrop of a Pennsylvania union steel town whose primary employer, the local mill, is about to shut down.

In a bid to drive attendance and enthusiasm for this team as a last rallying cry before the scotch-swigging owner (an heiress, mind you) uses the team as a tax write-off, Newman decides to play dirty. He encourages his players not just to win, but to savage the opposition in the process. It’s basically hockey the way that many of us wanted to play it, but were not allowed to (i.e., a low-blow boxing match on skates). In the end, the trick works and attendance zooms through the roof. The genius of the movie, though, is not the predictable path, but the procurement lessons it provides us…