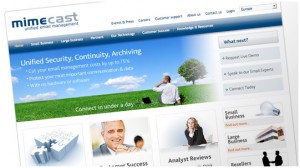 This week’s news of a £13 million ($21m) funding round for UK-based email management provider Mimecast gives further confirmation of the vibrancy of the SaaS landscape in Europe, in terms of both market opportunity and the strength of indigenous players. I’ve written several times in the past about the lack of visibility for European SaaS vendors, while taking the opportunity to highlight notable companies such as Netviewer, NTRglobal, e-conomic and others. One frequently recurring feature is a track record of organic growth ahead of significant venture funding — in Mimecast’s case, its growth to date, garnering a 2,500-strong customer base, has been achieved with minimal seed funding. Now Index Ventures, one of Europe’s leading technology VCs, has contributed what’s being classed as a Series B round to fund expansion of Mimecast’s business in north America, where it already has 300 customers.

The news comes at the beginning of a week that will see the formal creation of EuroCloud, the new industry body representing SaaS and cloud vendors across Europe, at its inaugural European board meeting in Paris on Friday. I’m posting this from Paris, getting ready to represent EuroCloud UK and to meet the chairs of up to 15 other European countries from Sweden to Portugal and Germany to Ireland. With a membership of several hundred European vendors already, the EuroCloud project promises to dissolve the cloak of invisibility that SaaS and cloud players in Europe have found so hard to break through in the past.