Human Interactions and the Rise of Social Characteristics in Software

Those of you who have read the 4th edition of CRM at the Speed of Light know that I’ve taken Thomas Vander Wal’s brilliant “Social Stack” concept, and added “context” as a characteristic to it. I’m increasingly convinced that the idea of ”social characteristics” is somethingthat has to be considered when it comes to the future of enterprise software design. 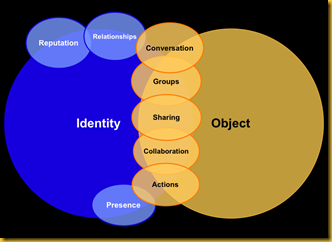 The idea is simple. Beyond the mere features and functions of operational software – especially at the enterprise level, software now has to take into account the actions and relationships of individuals and networks. The software’s job would be to extract and then to some extent, mirror the characteristics of human behavior so that, as a business, you will have far greater insight into your individual customer’s behaviors and their behaviors as a member of a network that consists of other potential customers. What that means is that you have to be able to root out the relationships that customers have with other customers, prospects, other companies – and not only that they exist but the strength of those relationships. It also could mean for example, that the software will locate in real time where you are and what you’re doing and even who you’re with.  The earliest incarnations of the embedding of social characteristics has been the software that promotes collaboration, groups and sharing as activities among people.  These are social characteristics that are a layer that rests underneath features and functions of contemporary software – especially that identified as part of the world of Social CRM.

More recently, I’m seeing a new trend which seems to be emerging from a variety of vendors that fits nicely into the framework of social characteristics. That would be companies that are providing what I have to presume to be sophisticated algorithms to ferret out the influencers both in the B2C space and the B2B space that would be valuable to a company. I haven’t reviewed their applications but intend to. I’m not aware of any of the larger vendors doing this as of yet, though I don’t doubt its in some of their plans.  But their existence indicates that software providers are beginning to understand the value of the reproduction of human activity within the software.  This means that the software will increasingly mirror the actual way that people live and will provide the actual information that people want to know.  As opposed to a pure feature/function approach which basically does no more than manufacture automated processes – though, as Seinfeld said, there’s nothing wrong with that.

Thomas V. has a great definition that mirrors this in a recent post on his terrific blog Personal Infocloud.

“This often leads me to use social software, social tools, or social computing as a means to distinguish the tools that better map to how humans, in their life and work, need to interact with others.”

Reputation (Influence), Relationships – Bereleveant, Pursway (both of these are specific to identifying key influencers in social nodes)

Collaboration, Groups, Sharing – Socialtext, Oracle, SAP CRM 7.0, Jive, (these are more in the realm of “social business” with tentacles into the “Social CRM” world)

I’m thinking about this right now a lot. Social characteristics, while I don’t have the idea fully fleshed out yet, is something that I think is really important to the future of the technology industry and in particular CRM. At least I now know there’s a reason why I keep saying that CRM is the only science of business that attempts to reproduce an art of life – which of course is based on the value and values of human actions and interactions.