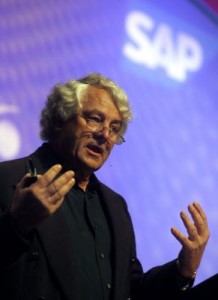 This weekend, it was announced that Leo Apotheker was leaving SAP immediately. Leo had been SAP’s CEO. Replacing Leo would be co-CEO’s Jim Snabe (focusing on technology) and Bill McDermott (focusing on sales). Also announced was the elevation of Vishal Sikka, the company’s CTO, to SAP’s Executive Board (the management board).

Recently, it had been widely rumored that Leo’s contract would not be renewed, and that a new CEO (or co-CEOs) would be brought in to replace him. Names bandied about for his replacement included:

Apparently, the rumor mill was fairly efficient this time.

This morning, SAP had a conference call led by Hasso Plattner, and including the SAP executive team. While I couldn’t participate, thanks to the magic of twitter, I was able to follow along. Below are some of the key tweets that came out during the call – definitely gives a good flavor of what happened, although not quite a transcript:

Blogs sprung up over the weekend, speculating on the changes and what they mean. Some of the key posts were:

Of course, now that the conference call has happened, I’m sure there will be a new set of analyses popping up, and the Enterprise Irregulars blog site is where you’ll be sure to find the best analysis.

So, what is behind all these changes? My opinion, for what it’s worth: Hasso Plattner wants to drive a great deal of technological innovation at SAP, and did not believe it could happen under Leo’s leadership, and without Hasso’s very direct involvement. Hasso has a great deal of confidence in Vishal Sikka’s technology perspective, and Vishal was appointed to the Executive Board as part of this change, pointing to Hasso’s desire to unleash a new wave of innovation at SAP. Jim Snabe will be given the opportunity to bring all of SAP’s products under one head (both development and product (“solution”) management). Bill McDermott has certainly already proven that he can run SAP’s field, so there is not much risk in this change. Perhaps the biggest risk is on the product side. The product organization is full of conflicting technologies, conflicting interests, and conflicting agendas. Driving change in this kind of climate will be very challenging for Jim and Vishal.

2 responses to “Changes at #SAP”