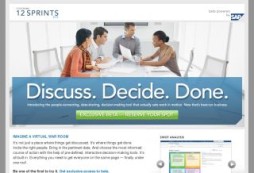 It’s been a tumultuous couple of weeks in the world of collaboration software, with major initiatives from two leading vendors at opposite ends of the market spectrum. At the heavyweight end of the enterprise market, SAP released into beta its 12sprints collaborative decision-making tool. From the high-volume end of the individual consumer market, Google unveiled Buzz, which adds social networking to Gmail and other Google tools. If you have Gmail as part of a Google Apps account, you won’t yet see Buzz, and probably just as well, since Google goofed on privacy when it first rolled out Buzz, automatically sharing people’s contacts (to the horrified dismay of those who were secretly cheating on their employers and spouses). But Buzz is on its way to the enterprise market, and will likely arrive before Google has finished ironing out all the wrinkles in its service (sound off on Buzz in the ebizQ Forum).

Both SAP’s and Google’s initiatives are further evidence of the surge towards ubiquitous collaboration that I named last month as one of the major trends to watch in 2010. Appearing in the same timeframe, they neatly illustrate the battle lines that are being drawn between two distinct schools of thought on where collaboration and social software ought to sit in the enterprise. SAP’s new offering brings collaboration into the heart of the business applications and processes that people are already engaged in at the core of their working routines. Google Buzz simply mines email and other existing collaborative applications to bring to life and leverage the social ties that already exist within them (such a no-brainer, it makes you wonder why this wasn’t done before, though perhaps Google’s privacy embarrassments give you part of the answer). Buzz, however, still begs the question of the utility of having all that extra information at your fingertips, unless it’s to increase your dependence on Google’s search technologies to help make sense of it all…