One of the most interesting aspects of last week’s unexpected and momentous executive reshuffle at SAP was the promotion of CTO Vishal Sikka to join the company’s powerful Executive Board. Coupled with the promotion of product development chief Jim Hagemann Snabe to the role of co-CEO alongside sales chief Bill McDermott, it signals an increased emphasis (some would say long-overdue) on technology and product innovation in SAP’s immediate future. 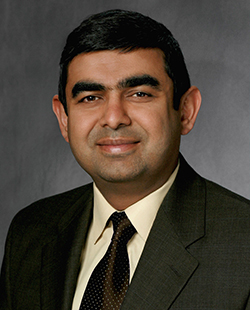 What of SaaS and cloud in that future? For a long while I’ve been meaning to look out my notes of an interview I had with Vishal Sikka (pictured) last summer. His elevation provides a topical pretext. My conversation with him had come about as a result of a blog-lashing I’d administered in June, when I’d picked up on some comments Sikka had made in an earlier interview. It was unfortunate timing that the interview happened to be published a week after John Wookey had unveiled SAP’s on-demand strategy in a keynote speech at the SIIA OnDemand Europe conference in Amsterdam, which I’d helped to organise. But I was impressed that Sikka took the trouble to respond to my blog post in a Talkback comment, and we spoke at length by phone a couple of weeks later.

Two themes dominated the conversation, and together they embody the dilemma that SAP and every other established enterprise software vendor confronts today:

SAP’s challenge is to embrace the first without trashing the second. And to do that even though customers are moving at an enormously diverse range of velocities, with some eager to embrace the leading edge of opportunity while others want to preserve their existing infrastructure and avoid unnecessary change for as long as possible. Accommodating those different rates of change across the installed base while still moving forwards is, concluded Sikka, “the biggest challenge we have.” Perhaps it was the need to better address that challenge that led to last week’s management shake-up…