IBM to push Linux desktops, and not 10 years too soon! 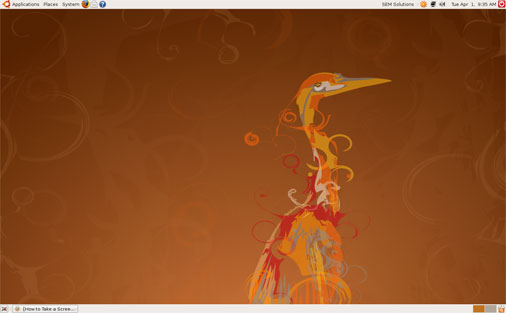 I received a mailer yesterday from IBM that it’s going to roll out its IBM Client for Smart Work, a bundle of IBM applications and the Ubuntu desktop, in the USA. That’s right- just a couple of weeks ago the strategy was aimed squarely and solely at Africa. But then…

The IBM Client for Smart Work package, launched September 24 in Africa, was initially designed for emerging markets but sparked calls for the solution in the U.S. The U.S. version is arriving just in time to help companies avoid the higher licensing, hardware upgrades and migration costs associated with Microsoft Windows 7.

Forgive me- but what?? As if this were new demand… it makes perfect sense for IBM to go after Microsoft, but why wait until Microsoft had an operating system fit for purpose before doing so? Vista was the time to really put the boot in. Windows 7 on the other hand, looks like a viable, even sensible, enterprise play.

Of course desktop strategies and investments are under scrutiny in a way they haven’t been for years. Cloud computing has changed the dynamic somewhat – Rentokil for example recently signed up to 35k Google Apps seats. IBM understands this disruption and is pushing Good Enough accordingly, notably through the Lotus brand.

Lotus general manager Bob Picciano is one of IBM’s best and brightest – he is now apparently tasked with the small matter of leading IBM competition against both Google and Microsoft. Easy job then.

“American businesses have asked for a compelling alternative and today we are delivering IBM Client for Smart Work in the U.S. Our goal is to help organizations free up desktop expenses to use in more strategic collaboration projects.”

Given IBM Social Bridgebuilder Andy Piper said he appreciated the historical perspective of some my work, I should perhaps take you all back in time.

Its 1999. A 29 year old ex-journalist is taking his first steps as an analyst at a boutique research firm in Nashua, NH called Illuminata. The firm does a lot of sell-side work, and has an awesome reputation in Systems and storage. The young analyst has been hired to help build the company’s Software practice, and timing couldn’t be better. IBM is getting its act together in terms of establishing a viable, independent software business. Technology fiefdoms are being knocked into somewhat amorphous brands. For a guy that thrives on complexity, and has already been covering IBM for four years, this was just perfect. Sell side – no problem.

But then inbound calls and emails from enterprises start coming in – looking for insights into IBM Software strategy, and asking the specific question: “when will Lotus SmartSuite be available on Linux?”

Customers were looking at Burlington Coat Factory (one of the first wall to wall enterprise Linux shops) and asking for more of the same. SmartSuite? SmartSuite? Remember that? Apparently you can still buy a license for $313.00. That’s right- Lotus used to have an Office suite, but IBM effectively ceded the Office software market to Microsoft. When I took the requests to IBM, and explained customers were willing, even anxious, to pull the trigger, nothing happened.

As far back as 1999 then, some IBM customers were desperate to get off the Microsoft conveyor belt. But IBM was just looking at the server. Its important not to be too revisionist when playing the history game, and clearly there was no obvious desktop Linux distro to support at the time. Certainly we didn’t have Ubuntu with its tagline Linux For Humans. But IBM customers wanted to run IBM desktop apps on Linux.

Ten years later IBM shops are finally getting their chance to go True Blue on the desktop. You certainly can’t blame IBM for opportunistic marketing, trying to elbow its way into the Windows 7 upgrade story. But from where I am sitting I can’t help thinking it should have started on this road earlier if it really wanted to help customers. Africa first? While Vista was flailing, now that was the time to make a run at customer wins in conjunction with Canonical. Imagine how much stronger IBM’s anti Win7 story would be it it already had a host of migrations to point to… in the tech business momentum is everything.

Picciano is going to take the fight to Microsoft, and for obvious reasons Lotus is the right brand to do it. He and Lotus marketing supremo Kristin Lauria seem really focused on the job, and it shows. But Picciano will be making up for lost time. Nearly 10 years of it.

Enterprise customers should (re)size their desktop needs in the the context of both cloud apps and virtual desktop infrastructure (VDI). IBM has a story there too, but there are plenty of options- notably Citrix (an IBM partner). Sun too has an extremely solid VDI story – one that I am surprised more folks haven’t picked up on terms of assets available to Oracle. But Windows 7 is just as likely to play a role as any other desktop technology.

In case you’re wondering hatever happened to SmartSuite with respect to the new OpenOffice-based Symphony suite? That’s a story for another day.