A Simple Hint Why SaaS Is Better 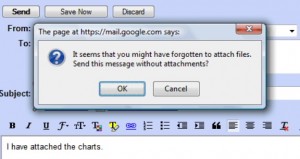 When I pressed send this morning on an email message, Gmail popped up a dialog box asking whether I’d meant to attach a file. “You wrote ‘find attached’ in your message,” it gently mentioned, “but there were no files attached.” Of course, as so often happens, I’d finished the message and pressed send without remembering to add the attachment, doh! I was really pleased and impressed that Gmail had added this gentle and oh-so-useful hint. It will save so many embarrassing resends, and thus go a small way to reduce the burden of overflowing inboxes in our lives.

The silent introduction of this reminder is a great demonstration of why SaaS is so much better than on-premise. The old way a feature like this used to be introduced was that it would get scheduled for release and you’d start reading about it for months before you actually saw it. The vendor would send out a press release about it, product managers would demo it at trade shows, journalists, analysts and beta testers would rave about it in reviews, and then finally it would show up on your shopping list. In large organizations it might be a five-year lag between the feature first being talked about and actually implementing it on a person’s desktop (I know someone working for a large oil company head office who has just been redeployed to a hotdesk station that is still running on Windows 2000, believe it or not)…

One response to “A Simple Hint Why SaaS Is Better”