I have been imploring software vendors to globalize and verticalize their applications for a while now – after two decades of cloud apps, less than 20% of the grid of applications across countries and operational processes is filled. I have been increasingly writing about fintech, shop floor, healthcare and other industry functionality. But I wasn’t sure when Tom Brennan, CMO of the Salesforce platform-based ERP vendor, Rootstock wanted to discuss what he calls the “Cannabusiness” vertical. I have known Tom for over three decades going back to Coda and more recently, Financial Force. He is a straight shooter, but all kinds of word associations crossed my mind as I thought about roots and weeds.

As background, cannabis legalization has been spreading across North America – 10 states plus Washington, D.C., have legalized recreational marijuana over the last few years, and full legalization came to Canada in October 2018. That made Canada the first G7 nation to do so.  Tom adds “Then you have the hemp side of the market – such as CBD (cannabidiol) oils, which claim to have many health benefits.” In many other parts of the world, irrespective of the legal status, enforcement of cannabis and hemp is increasingly lax. While this inconsistency causes nightmares for HR groups in terms of employee drug testing and compliance and for law enforcement, the industry itself is growing rapidly.

According to Rootstock “In just the past three years, industry employment has grown 110%. That’s faster than the ten-year projections for the trendy sectors of solar, wind power, and health care. And it’s why the industry was estimated at $10.4 billion in 2018, accounting for more than 250,000 jobs, and is slated to grow to $21 billion by 2021.”

The challenge for the industry is less about selling, much more about quality and consistency. While there are clear exceptions like their professionally run customer, Aphria described later, for many companies in the vertical, the need is one of differentiation earned through reliability.

Tom says “many companies that have entered this market must consider state-by-state regulations. A lot of them implemented entry-level systems or used spreadsheets to manage orders and inventory. But with a booming market, they’re now facing significant challenges around operations, inventory management, compliance, and keeping up to date with changing regulations. Many found themselves in a tough spot.”

Rootstock partners with another AppExchange vendor, ComplianceQuest. I had a chance to catch up with Prashanth Rajendran, CEO and Shalini Chowdhary, VP of Marketing and Strategic Alliances.  They have long offered quality, inspection, compliance and risk management to industries like life sciences, cpg, and aerospace. They recently raised a $36 Million Series A round led by Insight Partners. 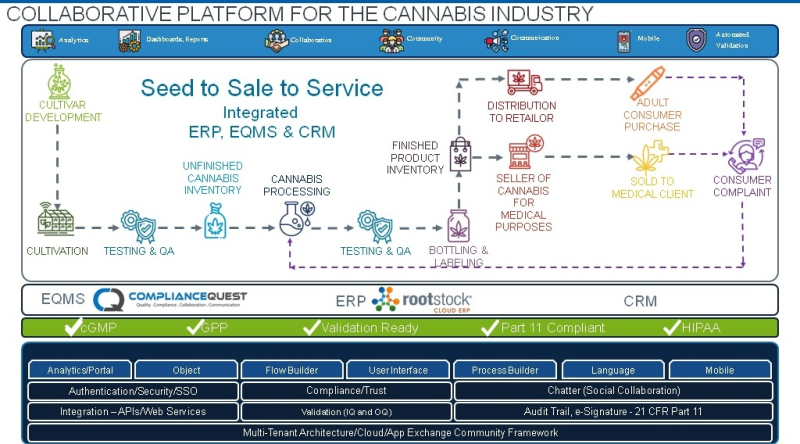 According to Tom, the flow is “companies take seeds and cultivate them. And then they have to perform testing and QA to measure potency and ensure consistency in their product. They want to process orders efficiently and compete on both the service and quality fronts.”

“On the CBD and recreational fronts, after they’ve packaged their products, they’re fulfilling orders to retailers or selling it through their own store fronts or websites. And all cannabis companies – both recreational and medicinal – have to be able to track incidents, in which customers may have had an adverse reaction. This is a huge challenge, and lot and traceability features can help.”

Recent scrutiny of the vaping market is drawing even more interest in quality management and traceability.

“We have track and trace capability where you can drill down from a CRM system. Companies will have the service case. They have the serial number or the lot number and can track it in the ERP system. They can see if it was tested in the ComplianceQuest system. Then figure out, do you need to pull the whole lot? ”

Many states are deploying tools like Metrc to track and trace cannabis inventories and products to origin when there are health issues. Besides the compliance issues, there is the inventory shrinkage issue. As Tom says “Companies have cannabis products flying out of their warehouses at a fast pace. When issues arise, they need to be able to track back to where those products came from, from which suppliers and what type of testing was done.”

Tom describes some of the customers in this vertical. “NuLeaf is based in Colorado. The company makes CBD oils from hemp. KIVA Connections makes gummies and chocolate bars with THC (tetrahydrocannabinol). Michigan Pure Med is going after the medicinal space and they consider themselves a pharma company”

But their most prominent customer is Aphria which is listed on both the Toronto and New York Stock Exchange, and is one of the largest cannabis companies in the world. In Canada, cannabis is legal for both recreational and medicinal purposes.

Aphria hopes to benefit in a number of ways from the Rootstock/ComplianceQuest functionality and the Salesforce platform including:

Aphria is bringing a professional image to the industry and as the video below shows their “manufacturing” process is increasingly automated. The more this industry matures, the more it should also help the vendors position for other process industry and other regulated verticals.