A perspective on the SAP Capital Markets Day

I am a customer and market analyst and tend to not attend too many earnings calls or Wall Street presentations. But I made time to listen to the SAP presentation yesterday. It was a coming out event for the 2 new co-CEOs, Jen Morgan and Christian Klein and there has been much speculation (with a capital S in my opinion, not fact based) about the activist investor impact on SAP trajectory. The full set of presentations is in the video here – without the breaks its about 3 hours long. The theme was “Growth and Operational Excellence” and I liked quite a bit of what I saw and heard.

To me, growth comes from market differentiation and here are key areas where SAP executives scored well

Both Jen and Adaire Fox-Martin made repeated points about Asia/Pac. SAP is very well positioned in that region as I wrote a couple of months ago “SAP has been in Asia over 30 years and now has over 9,000 employees spread across 31 office in the region. The event in Bangkok showed me just how far the competition has to go to catch up.”

I always shake my head at how little cross-selling has taken place across SAP’s product portfolio (listen to Jen starting around 0.16 and Christian around 0.34 about inter-dependence and synergy across SAP products). Most of their competitors can only play in one or two categories.  I am seeing many customers look at application rationalization, and reverse a decade of “ring fencing” their ERP with best of breed cloud applications. As SAP better breaks down its many siloes, starts to show more coherent road maps and delivers better integration, its broad suite should open up many new opportunities within its incumbent customers. 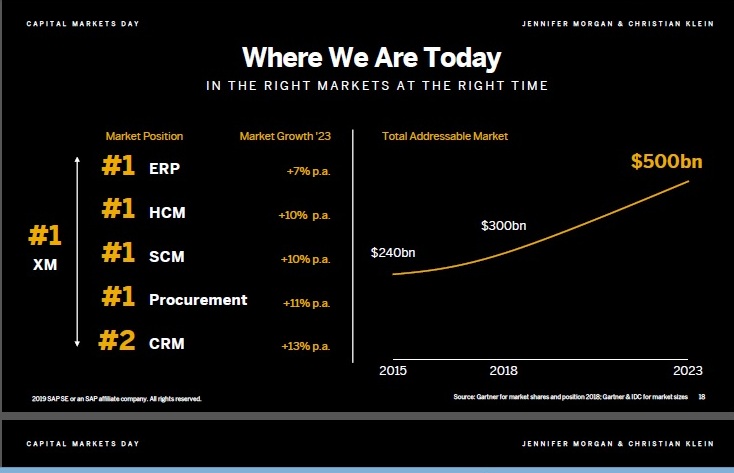 SAP is associated with large, multi-national customers, but the CIO of Chobani, the yogurt company, Parag Agrawal (starting 1:29) was a good representative for the mid-sized, fast growing market that S/4 is doing well in. 40% of S/4 adopters are net new to SAP. The ECC to S/4 conversion market is also gathering steam. As Adaire says, the question for most customers is not ‘if” but “when” “why” and “how”. As I described in SAP Nation 3.0 – “tilting its bell curve of customers” is its largest single opportunity. 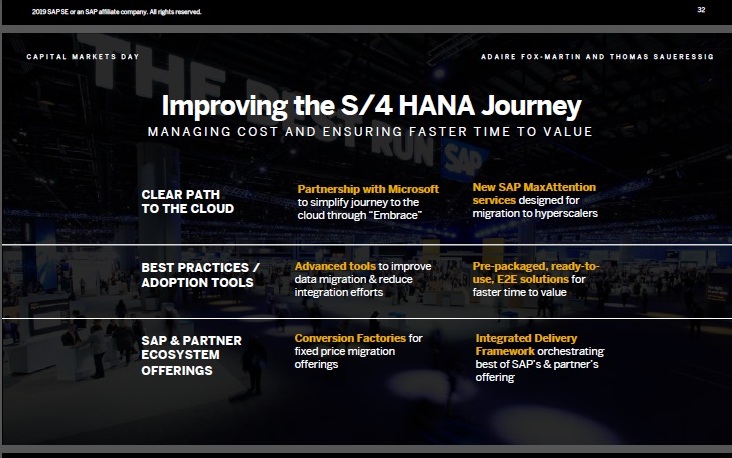 Qualtrics is still a missionary sell to many operationally focused ERP buyers but Ryan Smith humorously reminded the audience that precisely a year ago, he was presenting in a road show which valued the company at nearly $ 5 billion, and that now, as part of SAP, the deal size and customer growth has accelerated. It is another differentiation for SAP. Similarly, SAP has had fits and starts when it comes to the CRM market. But with all the musical chairs in the executive suite at many CRM vendors in the last few weeks you get the sense that market is poised for disruption. SAP’s CX portfolio, especially the Commerce piece, and with new leadership under Bob Stutz, will get another shot.

Microsoft and SAP have been ‘frenemies” for decades. At Gartner and since I have written about many joint initiatives like Mondecino and Duet (nearly 15 years ago). The collaboration around Azure opens up support of the vast Microsoft channel, and also simplifies the hyperscaler choice for many undecided customers (while keeping open support for customer loads on AWS, Google and Alibaba clouds). The cloud version of S/4 and SCP should in particular benefit.

Turning to Operational Excellence, there was quite a bit of focus on margin and cash flow improvement.

Christian has led a digital transformation within SAP for a couple of years and it is accelerating. It’s the tagline of “Best Run Business” applied to SAP itself. His points, starting around 0.38, lay out the high level agenda.  Adaire described some of the digital and AI impact on the sales function around 1:26. Thomas Saueressig, starting at 1:09 talks about changes in the development organization. He also addressed the thorny issue of integration, especially across the slew of acquisitions in the last decade,  that customers constantly complain about. In his previous role as global CIO at SAP, he is acutely aware of the pain points (It’s also something Bob Stutz in the CX area will have to accelerate). He also touched on centralization of infrastructure. which CFO Luka Mucic quantified (starting at 1:40) as they move from 25 mostly acquired technology stacks to a converged one, and also shifting many cloud loads to the 4 hyperscaler partners.

Luka also touched on improvement of cloud gross margins and marketing and SG&A efficiencies – consolidation of many sponsorships, supplier base among others. 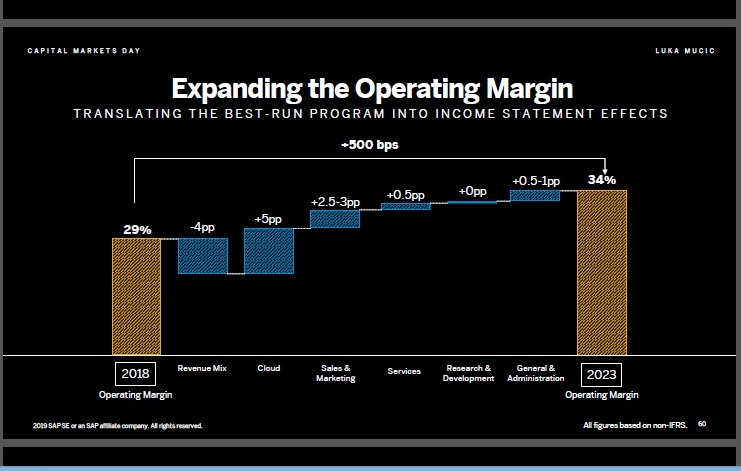 Margins at the expense of customers?

There is plenty of fat to be removed from within SAP and that should deliver the improved margins SAP is promising to investors. But the temptation in our industry is also to milk the customer (Oracle and the fast growing SaaS vendors are not much better). In the last few years, we have seen quite a backlash to Indirect Access and other SAP audits. I am also seeing SAP propose license conversion fees to move from on-prem to cloud versions. Customers are willing to pay for new functionality, not so much for what they have already paid years in maintenance. So, trying to extract more from older function points, which frankly have been commoditized over the last couple of decades, will only slow down incumbent customer traction.

Focus on total cost to customers?

Historically, SAP has not been very good at benchmarking and managing its partners. That led to my quantifying the huge “GDP” of SAP Nation. As we look at moves from ECC to S/4, I am starting to again see scary SI proposals. Labor intensive and not much automation, with the suspect quality and economics those threaten. Now with the 4 hyperscalers customers could face significant additional exposure. SAP likes to brag it has 000s of partners – without pointing out that cost is borne by customers. I would like to see more SAP detail on how it will better manage its ecosystem, and accelerate its automation and application of ML to its many of the routine conversion, testing, training and other tasks – see more ideas here. Adaire did mention conversion factories – like to hear more about that.

Not enough R&D or Capex to grow the functional footprint?

There was surprisingly little on industry functionality. SAP keeps promising its partners are working on it. For the next few years, it appears there will be little excess R&D or capex for acquisitions. While SAP needs that discipline in the short term, markets don’t wait for ever. Beyond verticals, as I wrote earlier this week “the definition of the “enterprise” continues to rapidly expand and morph, and I see a very fragmented market for the next few years”. SAP says it has a shot at a TAM of $ 500 billion by 2023. In my opinion, they could already be aiming for a trillion.

Overall, there was much to like in the 3 hours. As an analyst, it is my job to keep pushing vendors to do more for customers, but realize the new executives already have a very full plate to tackle. Should be a very exciting next few years. It is a great way to kick off a new decade!