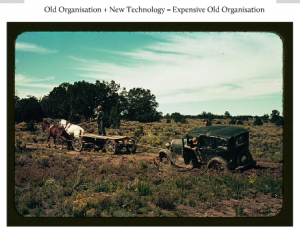 Mitch Lieberman, a VP at SugarCRM is a living proof of concept – vendors can contribute serious thinking to the ongoing discussion around how to create and apply business strategies to customers. Despite the cynical thinking of many out there. He recently did a presentation using the Prezi online cool tool (for some things) to describe his thinking on how Social CRM is perhaps the most significant pathway to the accomplishment of Social Business. Its well worth checking out and, thinking about. But, that’s not what I want to address. There was a comment by someone with the handle munishgand on Mitch’s post which reminded me of something that I not only have been mulling over for a long time but meaning to write about. Munish and Mitch inspired me to pen this thing. Here’s the part of Munish’s comment that I want address:

“To me, the picture “Old Organization + New Technology = Expensive Old Organization” (http://grab.by/grabs/f614c734bb56ed20df7f93b81fc5f74e.png) says it all. There is a big shift in culture required for a social business to thrive in the new environment. Else, why pave the cow paths? What I am wondering is the following. Changes in culture are notoriously difficult to accomplish. Should a company stop trying to get the tools in if it cannot make the cultural shift? Sometimes, an exposure to the technology provokes the cultural shifts needed.”

Thanks for that, Munish. Its a good insight and, when it comes to the relationship of Social CRM and the more traditional forms of CRM, a very important question – because there is a distinct difference between how technology needs to be treated a.k.a. thought about in Social CRM then it was in traditional CRM.

Sometimes Mantras are Made to Be Interrupted

“CRM is a philosophy and a business strategy, supported by a system and a technology, designed to improve human interactions in a business environment.”

What this reflects is that CRM has always been the program for development and execution of customer strategy – what are the things that you actually do to see that customers relationships to companies are always meeting the expectations (if not exceeding the expectations) of those customers. Traditional CRM was more about managing the relationships – which practically translated meant providing more automated processes and interpreting more data so that the company both understood the customer in a way that was useful to them – and at the same time, the customers received at least the minimum of what they needed to handle their relationship to the company. Accomplishing this would be a traditional CRM success, but traditional CRM was embedded in a business ecosystem that was still owned by the company. From almost the first day of CRM (which is mythic at this point), there was a fight to overcome the popular perception – among the practitioner companies that CRM was a technology that you bought. Despite the best efforts of the “CRM is a strategy first” camp, the technology persists as the “prime mover” of CRM to this day. That meant that when you were developing a CRM strategy you were implementing a CRM system not developing a CRM program. I was among the folks that pushed the idea that CRM was a strategy and program first and technology choice was the last facet of developing that program – as an enabler – not the primary focus nor the driver of a CRM strategy at a company. Regardless of what I or anyone else thought, the popular view of CRM was and still is that it is a technology and system first. That has been adopted at many many organizations as just that. The practical implications for this particular approach have been almost staggering in consequence. As a result of the technology system, not program outlook, hundreds or even thousands of organizations implemented CRM systems from multiple vendors without a clear vision of what they wanted to do at the company when it came to their customers or what it meant to have a customer-centric culture. The implementation was the thing. The sequence was:

“We want to be customer centric. Let’s go out and buy a CRM system and put it in. We want the CRM system to have this feature A, and do this function B and we in the future could use this feature/function C. That will make us customer-centric.”

Keep in mind, we’re not talking about stupid companies with no plan. But their plan was geared toward what they wanted from the technology, given what they thought they needed to do with their customers. It wasn’t what they wanted from their company given what they needed to do with their company. It was a system, not a program. While that’s better than thinking that they don’t have to be customer-centric, its still a real problem, because of two things:

The result of this was that even when the technology was technically proficient, the ultimate customer-centric perspective that the company needed to embrace wasn’t. Does this mean that traditional CRM was a failure? Hardly. But what determined success was delimited by the capabilities of the software. It also meant that while the culture wasn’t impacted by the software, the software was impacted by the culture – meaning that the existing culture wasn’t changed and thus made adoption of the software far more difficult, because, no matter what the theory – software as a driver or an enabler – it still was, in practical terms, an enabler only, which meant, as CRM software, it was supporting an idea or outlook that wasn’t part of the company’s actual outlook. A square peg in a round hole. The early numbers surrounding the software adoption supported this. The primary reason for lack of adoption was the lack of involvement of the user from the beginning of the process (47% of respondents in an IDC survey on CRM user adoption in 2003). Why the lack of involvement? Because the cultures of the companies hadn’t changed to understand that the user, and the customer drove the requirements, not the other way around. This also led to the higher failure rates of the earlier days – because the expectations of the results around CRM were driven by the software, not by a CRM program that used the software as a tool.

But then along comes the social customer in 2003-2004. What does this social customer do that his more traditional brethren didn’t? He communicates outside the corporate firewall with those he or she trusts the most – his or her peers. He uses what to communicate? Tools that AREN’T traditional CRM tools but are easily available social software, hardware and channels. That would be cell phones and now smartphones. That would be social networks (66.8%) even more than email(65.1%) (see Nielsen’s Global Marketing Insight survey of March 2009). That would be Skype, (521 million), Facebook (400 million), Twitter (100 million), and hundreds of other channels not behind the corporate firewall. From 2004 on, people seized control of how they communicated 24/7. What devices they used, what tools they used, what channels they used, when they communicated, what they expected as a result of that communication, what kind of response they got, all shifted into the hands of the individual. In the world of business, communications about a company no longer needed some company venue to occur. For a communication or array of communications to affect a company, it didn’t have to occur with the company’s acquiescence. Even more telling, it could occur without the company’s knowledge. This meant that the company no longer controlled its own destiny in regard to its customers, though it, of course, continued to control its own operations. (the fact that the company still needs to run itself is one of the things at the core of the difference between Social CRM and almost anything else with the word “social” in it) The conversation passed into the hands of the customers – meaning they could damage, grow. or affect somewhere in between, a company without the company having much to say about it. So what did this do to CRM?