Greenpeace has now turned its attention to cloud computing, its impact on the energy consumption and the resultant influence on the environment. A somewhat loosely compiled report takes a shot at the various cloud initiatives of the consumer tech majors like Google, Apple, Microsoft, Yahoo etc. and arrives at a broad set of concerns that need to be addressed.

The Greenpeace chart details the power needs for some of the major data center projects. 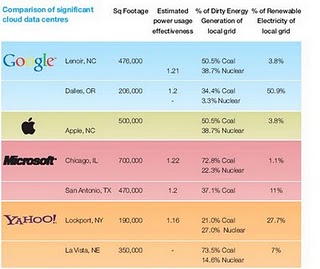 The report focuses on the role data center builders can effectively play in the environment al sensitive design and investments that look to be highly needful. The report envisages a role for data center builders in becoming an integral part of the solution to changed in global climate centered issues and emphasizes the positive impact that these players can make on the tech ecosystem and by extension on the extended universe . Greenpeace commissioned studies on carbon footprint of the data centers show that there is a wide space that can be covered by them potentially leveraging clean and renewable energy while building the business cloud infrastructure for their customers. Key approach recommended if for the data enters to pressurize the government , local bodies and energy manufacturers like utilities to make renewable energy available readily.

Metrics show the enormity of the task at hand. Greenpeace believe that public awareness is the best ammunition in the pursuit of any cause. On the week of the launch of the Apple Pad, it brings out data in support of its position. Apple investing in NC data center is tied to cheap power available in large measures from coal fired plants therein. In its report titled, Cloud Computing and its Contribution to Climate Change, Greenpeace provides estimates that data centers power consumption could peak at a million megawatt hours of power by 2020 and its sister cousin industry viz the telecom sector could be using energy around 950,000 megawatt hours. Consistent with its focus on advancing its perspective via news coverage, Greenpeace tied its report to the release of this week’s release of the Apple iPad. The reality is that in the last decade or so there has been a massive proliferation of computing power in the form of desktops, laptops, smartphones, iPods, tablets, e-readers, gaming interface devices – all these not only consume power by themselves but are also massively connected with cloud grids – all consume power in large numbers. Greenpeace centers its concern mostly on the 2008 analysis by the Climate Group and the Global e-Sustainability Initiative, and finds that the cloud could consumption of energy could massively explode (almost triple) in the next ten years. One of the projections in the report include that data centers would produce more carbon than the airline industry by 2020 “if current trends go unchecked.”
The cloud energy phenomenon, as the report recognizes is going to be a bit of a paradox in managing. On the consumption side, major conscious tech majors – the likes of Google who consume power have a major incentive in bringing more efficiencies in power consumption and are actively working towards advancing the field aiming at reducing energy consumption. The hope is that the best practices and technology that they advance would in time progress to cover the tech ecosystem. While this can happen, the fear is that the connected devices around the world could massively push up the energy consumption at an aggregate level. All of us have more connected devices at home compared to what we had in the last 5 + years and so this explosion should rightfully worry the likes of Greenpeace. The report, part of Greenpeace’s cool It Campaign, builds on the group’s criticism of Facebook for building its new Oregon data center in an area where utility power comes primarily from coal. Incidentally, there is a Facebook group urging Facebook to use only clean energy but has not been able to move the needle a tad bit. So much for Facebook activism to show or fail to show real results! The important factor here is that all the criticism of IT energy usage, the sector is an important lighthouse for improved sustainability. “While the sector plans to significantly step up the energy efficiency of its products and services, ICT’s largest influence will be by enabling energy efficiencies in other sectors, an opportunity that could deliver carbon savings five times larger than the total missions from the entire ICT sector in 2020,” points out the 2020 report.

Greenpeace writes. “The industry also needs to take responsibility for where it gets its energy from in the first place. Simply put: Will the cloud run on coal or renewable energy? -“We are calling on IT industry giants to put their might behind government policies that give priority grid access for renewable sources like wind and solar energy,” Greenpeace said. “IT companies should also support economy-wide climate and energy policies around the world that peak climate emissions by 2015. … The great innovators of the digital age can and should be leaders in promoting an energy revolution.”
In reality, as things stand today, clean and renewable energy is unfortunately not the one and only criteria for data center location selection and factors like local incentives, benefits, energy grid pricing mechanisms all play important roles in decision making . Greenpeace is right in highlighting the fact that the issue of clean energy needs to be pushed into the center of decision making by data centers but realizes that this won’t be entirely possible to be acted upon just by data centers and calls for mobilizing public and political views to support this. While Greenpeace and other activists could focus on cloud service providers, there is a larger role to be played by the public – optimum usage of energy in day-to-day lives by millions of us actively using the cloud – without that the laudable goal of clean and renewable energy will always remain a dream.