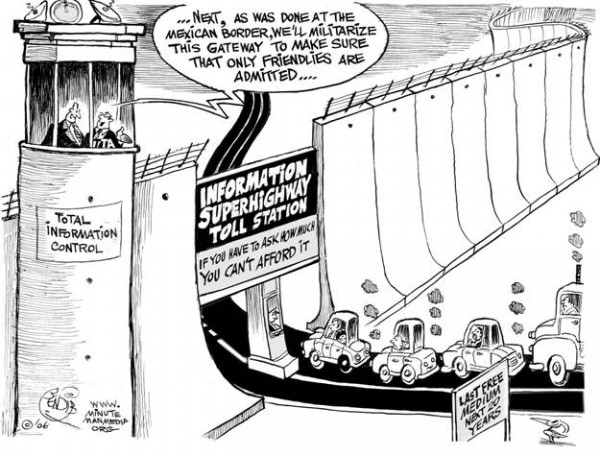 Comcast won a major legal case it filed against the FCC regarding Comcast’s attempt to throttle BitTorrent traffic on their network. The FCC fined Comcast on the grounds that it violated their net neutrality policy, and Comcast took them to court arguing that not only were they wrong to regulate internet data on the grounds of net neutrality, they actually didn’t have the authority to regulate the internet at all because even the FCC has said that the internet is not a telecommunication service and nothing in the Communications Acts says otherwise.

The FCC countered that the doctrine of “ancillary authority” granted them such powers even though the regulating law, the Communications Act, did not:

It is in itself a remarkable legal theory, allowing a regulatory agency to act in areas where there is no grant of authority, simply because it is related to an area in which authority has been granted.   In a very real sense, it is a “horseshoes and hand grenades” doctrine, in which close is good enough to count. Even within the framework of ancillary jurisdiction, however, the case for jurisdiction in this case is startlingly tenuous and dangerously broad. (For an excellent analysis of the problems, see James Speta’s new study here.)

[From Horseshoes, Hand Grenades, and the FCC: Will the D.C. Circuit Ground Net Neutrality Rules?]

What this means more broadly is that any notion of the FCC imposing net neutrality rules on it’s own accord is now dead… deader than dead. The Federal Appeals Court has definitively ruled that the FCC doesn’t have the power to regulate the internet and it must go to Congress in order to get that authority or reverse it’s own decisions regarding what the internet is and opening up a whole new Pandora’s Box.

The spin doctoring of this opinion will now commence. But it is very hard to see how the NPRM can go forward—or survive even the briefest of legal challenges should the FCC simply do so—given this ruling. The FCC could try to appeal to the U.S. Supreme Court or go back to Congress for explicit authority to issue net neutrality rules. As I’ve written earlier, the FCC could also try to reclassify Internet services under the common carrier rules of Title II, where it has extensive regulatory powers.

Whether or not we agree with the decision we should find common ground in the concept that regulatory agencies must be restrained to what Congress originally intended and where there is ambiguity due to the evolution of technology and society Congress must act to expand or restrain agency powers as a matter of law rather than the agency itself expanding it’s own powers by fiat. Doesn’t matter whether we are talking about the FCC, EPA, or SEC, Congress must do the job required of it by the Constitution.

One response to “Net Neutrality is Now Deader than Dead”