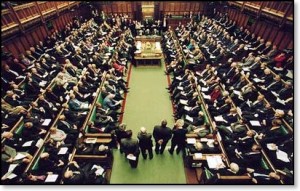 If you thought the esteem of the UK parliament couldn’t fall any lower after last year’s devastating expenses scandal, then the passing of the Digital Economy Bill in a parliamentary process known as the ‘wash-up’ will have come as something of a shock. UK blogger Simon Deane-Johns sums up the disgust felt by the many digital citizens, whose fury drove #DEbill to become the top-trending Twitter hashtag worldwide this morning.

As fellow ZDNet blogger Zack Whittaker reported last night, a handful of MPs spent just two hours debating the bill before it was passed into law. PaidContent UK has a useful clause-by-clause summary of what the bill includes (and what was withdrawn at the last moment), but by far the most pernicious move was to include a clause that means consumers could lose their Internet connections and face other legal sanctions if it can be shown those connections have been used to breach copyright.

As opponents pointed out, this could be used by government and big business to suppress downloads of leaked material, and could lead to innocent subscribers being penalized by others using their Internet access without their knowledge. What’s more, it won’t catch hardcore freeloaders, who will simply find new ways to infringe without getting caught. TechCrunch UK’s Mike Butcher writes today of the bill’s nightmare of unintended consequences:

“In April last year, Sweden’s internet traffic took a dramatic 30 per cent dip as the country’s new anti-file sharing law came into effect … But several months later … accessing of illegally shared movies, TV shows and music simply recovered [with] one crucial difference. Much of the internet traffic was now encrypted. In other words, the very laws the entertainment industries had lobbied politicians to pass in order to protect their industry had created the even bigger headache of untraceable file sharing.”

So why has parliament passed such a crass law? Before I explain, I must make some disclosure, as this topic combines two of my greatest passions. Normally, I simply make a commercial disclosure because I’ve spent the past decade writing about and working in Internet computing. Today, I also have to add a political disclosure, because I’m a paid-up, activist member of the UK’s third-largest political party, the Liberal Democrats, whose MPs, I’m proud to say, voted against the bill last night. More on that later — and what happens next — but first let’s take a look at the bigger backdrop to how last night came about.

The Digital Economy Bill is a classic example of what happens when society struggles to get to grip with change. On one side of the debate you have the established media businesses, who have been around for many years, pay large amounts of tax and employ thousands of people. So of course they have the ear of government — not only politicians like the business minister Peter Mandelson, but also the civil servants who advise them and draft the legislation. Content creators have genuine concerns, of course, but they would also prefer not to change a business model that’s served them well in the face of technological disruption if they can help it, irrespective of the wider public good. It’s up to politicians to take such bias into account when they make decisions.

On the other side of the argument you have a growing industry that doesn’t have the same established presence, brings in less revenue and thus taxes and employs fewer people…