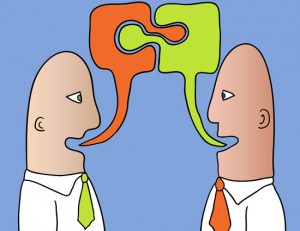 This is meant to be a simple post.  Flat out, I want to say that there is a difference between “ the customer’s control of the conversation” and “customer’s owning the relationship.”  Because there is a discussion that I see looming on the “ownership of the relationship” I’d like to clarify my thinking at the get go, if you’ll be willing to listen.  Before I do that, so that there is no misunderstanding on where I stand –

First, the relationship.  The customer doesn’t own the relationship.  He can’t own it – its a relationship.  I think Denis Pombriant, a man who has been one of the great pioneers in enterprise thinking for many years, has a superb discussion of what he calls “the relationship entity” on his blog that you should read. His fundamental point is that it takes two to tango when it comes to a relationship, which of course, has to be the case – or it can’t be a relationship. What he sees as important, and I agree with 100%,  is “relationship health” based on transparency and fair mutual value.  His quote here – “Relationship health stems from honesty and transparency and a sense that each party feels it is getting fair value from its contributions.”  A perfect description.  That is what all relationships and in this case, the customer/ company relationship is all about.  I hope I made my perspective clear in the 4th edition of CRM at the Speed of Light – the company owns the company, the customer owns their own personal value chain so to speak. That’s why there is a difference between SCRM and VRM.  Vendor Relationship Management is what the customer does to command their side of the relationship.  SCRM is what the company does in response to the customer’s control of the conversation – and all the other things associated with that.  But the company still owns itself – meaning its operational practices and its objectives and its records and its legal status as a company.

Speaking for myself, and maybe someone else or some others, I’ve never said the customer owns the relationship. I think that the customer is at the hub of business ecosystem – to the point that you can call it a customer ecosystem. Meaning the customer drives demand and the company is now forced to respond to that.   But a relationship between company and customer is exactly what Denis says it is and that relationship’s success is the essence of SCRM.

What about the conversation, which seems to be a nebulous term? “The Conversation.”   To be clear by what I at least I mean by the conversation – it is an ongoing series of 1 to 1 to many to many dialogues that can go on outside the purview of a business.  It relates to a particular business when it is a dialogue that concerns their brand in some way ranging from a nondescript comment to a complaint to waxing rhapsodic about something that the business produced (for example).   The conversation in the past was often driven by the messaging of the brand pushed to the customer. We all know the history of the 1960s and Madison Avenue and how they drove demand for businesses around products. But now, the these discussions occur, often quite transparently, without the business’ knowledge or involvement.

This isn’t new. We always gossiped about things we liked and didn’t like.  But its the nature of the relationships which, via the web and mobile devices, have extended beyond a simple 1 to 1 and gone to the 1 to 1 to many to many – meaning the impact is far more profound – either good or bad or more extensive – but far more profound than it has been in the past. It is also more complex because there are people who are engaged in the discussions that are influential to specific groups and what they say carries more weight than what others say – thus adding an additional layer of complexity to the interrelationships that this matrix of conversations has.

There are reasons why they’ve lost control:

What the control of the conversation means is not terribly complicated though it seems to be somewhat confusing to many.  It simply means that the customer can impact a company in good and bad ways without the company having anything to say about it. It doesn’t say the company can’t try and have conversations with customers. Companies are increasingly being pushed to respond to customers and that is where SCRM begins to show itself.

Hope that clarifies it. If not, let me know what else I can say.  Talk amongst yourselves. Give yourself  your own topic. (Mike Myers, SNL, forgive me).

One response to “Customer Ownership: Relationship? Conversation? Simply Put. SCRM is not VRM. Simple Being the Operative Principle”