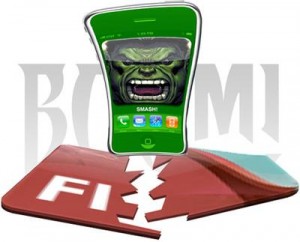 Image credit: who knows... this image shows up on too many sites without accreditation:-(

Apple’s strategy towards Adobe Flash drives me nuts.  There’s yet another flurry of posts about it as Adobe officially abandons further work on Flash for the iPhone.  Adobe hints they’re going to be more Google Android focused according to Sarah Perez, and there have certainly been all the right rumblings in terms of a good connection between Google’s Chrome browser and Flash called “Flash Embrace“.  Honestly, these Apple moves are getting a bit too Orwellian.  The new developer agreement that sparked all the controversy reads, “Applications must be originally written in Objective-C, C, C++, or JavaScript as executed by the iPhone OS WebKit engine…”  So they’re basically killing a whole raft of development possibilities, not just Flash.  Clearly their objective is total control under the banner of ensuring a consistently high quality experience.  But the reality here is that this will lead to total monopolization and monetization for Apple.

I had to chuckle when Steve Jobs painted himself as the underdog out to help publishers avoid the total domination of Amazon’s Kindle (hat tip to Techmeme for finding that NY Times post).  Doing no evil?  Hardly.  Helping book publishers force Amazon to raise Kindle book prices to help his own iPad get more control?  Absolutely!

Developers and many onlookers, for the most part, are fairly outraged.  There are a few that seem to think it’s a good idea what Apple is doing, but it almost sounds like they’re sucking up to Apple, dislike Adobe, or have some other axe to grind.  GigaOm is starting a series about the whole topic:  Open vs Closed: How much is too much?

Speaking of axes to grind, I one too.  I’ve written a little application for the CNC machinist’s world called G-Wizard.  For a variety of reasons, I wrote it in Flex, which was extremely well-suited to the job.  It turns out this application would be extremely handy to have in your hot little hand while you’re trying to operate the machine tool on the shop floor.  I’ve got scores of users requesting an iPhone port.  And in fact, Flex would be the perfect vehicle for this.  G-Wizard already runs seamlessly on PC, Mac, or Linux with no extra effort on my part.  It is delivered over the web and brings new data to itself from the web.  Think of it as a minimal SaaS application (I may write some posts on how that works if there is interest).  Flex’s ability to morph screen layout would be ideal to making it usable on an iPhone.  Unfortunately, Apple is going to arbitrarily make it impossible for me to make my users happy.

Most of the chatter about Flash versus HTML 5 focuses on its use for video, but my Flex application is a completely different case.  Flex is a mature development platform and HTML 5 is a long way from that.  What are the alternatives?  Writing it in Objective-C, C, or C++ is just out of the question.  Javascript would be extremely cumbersome too.  None of those tools would be as productive as Flex, and each would require a total rewrite of the application.

Can I borrow a page from Adobe and just focus on the non-iPhone Smart Phone world?  I guess I could, but so far I have had many requests for an iPhone version and no requests for, say, an Android version.  I run Google Analytics on my web site, and it provides a nifty report of mobile visitors.  It turns out that 84% of my mobile users are using an iPhone, iPad, or iTouch.  Sure, Android is growing like crazy, but its got a long ways to go to catch the iTsunami that is here today.

It looks like I’m stuck suffering the slings and arrows of outrageous Apple behavior.  Rats!

One response to “To iPhone Or Not To iPhone, That is the Question”