In 1790, at about the inception of the US Constitution, the American lumber industry was centered in Maine, then part of Massachusetts. Overharvesting timber to meet the demands of a growing domestic market as well as a robust international market for ship masts, planking and other naval stores eventually started the industry’s westward migration, first to the Mid-west and ultimately to the Pacific Northwest. 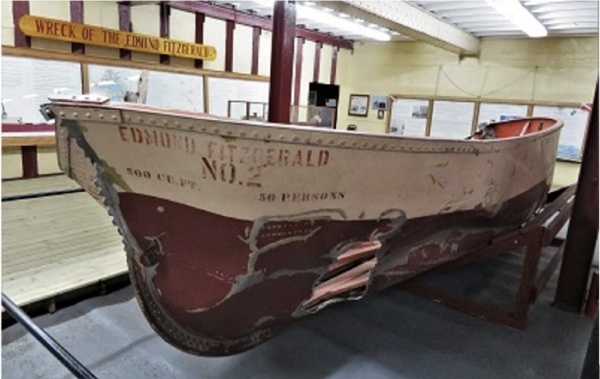 A lifeboat from the Edmund Fitzgerald.

Packing up and moving west was a staple story, an origin myth, of America long before Horace Greeley advised Civil War veterans in 1865 to “Go West, young man, go West and grow up with the country.” If you were a lumber producer in those days, moving simply meant packing up the movable components of your sawmill and following the setting sun. Lumberjacks and other workers followed.

Lumber is not the only resource that drew Americans westward. The lure of free farmland mixed with many other extractive industries like mining were magnets for new immigrants. The petroleum industry now found in many states started in Titusville, PA in 1859, and Pennsylvania Grade Crude Oil was once branding as celebrated as West Texas Intermediate crude is today.

The idea of picking up and starting over in business shares this story and though it began as a natural response to resource depletion, it still carries through to all kinds of industries today.

Today people with dreams in the arts, technology and science head to the west coast, to California, America’s most populous state and Washington and Oregon are not far behind in their allure. More than in the natural resource extraction industries of centuries past, modern business extracts as much as it can from a product category before moving on. If the market for hula hoops collapses, we immediately ask what other things we can sell that come from plastic extrusion machines.

All of this worked fine when the American domestic market was relatively closed by oceans and the economics of a world rebuilding after a horrific war. But today, picking up and moving west is globalized like everything else and the next destination appears to be Asia. While many supply chain companies and workers may be stranded in America, capital has few problems crossing the Pacific and that stranding has disrupted our politics and economics.

Since the financial breakdown of 2008 we’ve become attuned to zero sum economics assuming that other countries’ gains come at our expense. Zero sum economics drives a tribalism that pits American against American in a race for scarce resources and the divisiveness shows up in our politics.

Businesses move production off shore under the assumption that it can produce in lower wage countries and still sell in American markets. This is good for almost everyone because it keeps costs low and thus inflation in check and provides inexpensive goods to people whose wages have been cut through these economic moves. But domestic inflation continues so that the cost of goods and services produced in America continue to escalate to the point where things like education and healthcare are becoming out of reach for all but the wealthy and well off.

Moving your capital to another market to leverage advantages offered in the new market, such as lower wags, is sometimes called a lifeboat strategy and as with any lifeboat situation, not all are saved, only the most essential. Those left behind see the retreat and erroneously blame it on excess competition from fellow citizens or immigrants rather than labor market shrinkage brought on by corporate departures.

Politics and a lifeboat strategy

In a recent op-ed in the New York Times, columnist and Nobel Prize winning Economist Paul Krugman laments the Republican Party’s nihilistic behavior which many people believe is consumed by lies and conspiracy theories rather than facts and how to make constituents’ lives better. Of the campaigning in the runoff senate elections in Georgia he wrote,

“They aren’t running on issues, or even on real aspects of their opponents’ personal history. Instead they’re claiming, with no basis in fact, that their opponents are Marxists or “involved in child abuse.” That is, the campaigns to retain Republican control of the Senate are based on lies.

That’s not a flaw, it’s a feature and it shouldn’t surprise anyone.

In a democracy, if you want to control power you first have to get the consent of the governed, as the Enlightenment Philosophers like Jean-Jacques Rousseau wrote. The easiest way to do that is through appeals to emotion not logic. So, they depict their opponents as Communists and child abusers or even baby killers. It works but only over a long time frame, because these ideas need to gestate.

A populist can take advantage of the emotions stirred up over a generation or two and we’ve reached that moment. This instant in American life asks if there’s critical mass for further implementing a capitalist lifeboat strategy.

We’ve already globalized, sending industries and jobs to cheaper labor markets and we’ve assisted capital flight by paring corporate taxes and those on the rich. If the lifeboats don’t sail, there is a high probability that some of their tax cut gains from the last several decades will be clawed back by a new administration intent on rebuilding a crumbling infrastructure, the environment, healthcare, and making investments that will make America competitive in the world in this still new century.

Clawing back tax breaks won’t be enough. What’s needed is a way to stabilize the national and global economies that support capitalist ambitions but still leaves a nation with good jobs and stable industries. To find a model we need only look to the 1980s and the crisis in auto production.

At the time, the US auto industry owned the domestic car market and it showed. Decades of protection from foreign competition had made the automakers uncompetitive producers of cars ill-suited for markets with high gas prices that demanded efficiency and reliability. Foreign producers, led by the Japanese, stepped in to fill the void to a degree that frightened domestic producers and their friends in government.

The solution that was proposed but never fully implemented was to place a quota system on foreign-made cars. Critics said that such an approach would only shield American producers from the demands of the market making them even less competitive. The threat and subsequent legislation created a loophole through which foreign producers would build factories in the US and sell their domestically produced cars unfettered by quotas and tariffs.

It worked too. Today the big three of Detroit have about half of the US car and light truck market, equal to just General Motor’s slice of the pie in the 1980s, but they’ve survived. At the same time, foreign producers including Honda, Toyota, BMW and Mercedes-Benz have dotted the landscape with factories. The largest BMW factory in the world today is located in Spartanburg, SC, not Stuttgart Germany.

So what’s the lesson for today?

Avoiding fuller implementation of a lifeboat strategy and capital exit requires us to think different about the US market. We need to make production in the domestic market attractive to producers with wandering eyes. Domestic content was a solution in autos in the 1980s and it could be again.

How to work it

Requiring sellers to produce some or all of their wares domestically has worked in the past and could work in a variety of industries where foreign competition, often supported by governments, sell below market costs. No foreign producer should be allowed unfettered ability to take a majority position in any major industry because, too often that means producing overseas and only marketing in the US and that’s bad for American jobs.

The World Trade Organization (WTO) was set up to manage unfair competition, and it works though it is also plodding. It often fails as a practical matter because instances of unfair competition must be documented and adjudicated, processes that take too long in rapidly changing markets where emerging companies can go broke waiting for the WTO.

As we look at America’s productive capacity at the beginning of the Biden administration, we can see whole industries that have decamped for lower labor markets. Steel making, textiles, auto making, appliances and even computers were once domestically produced but the majority off production has long since migrated to lower labor markets.

To an extent, this is appropriate. The center of industrial textile production has moved around the world since its inception in the British Midlands at the dawn of the modern industrial era. Textiles, steel making, and many other industries have formed a ladder of economic progress for many countries. But any nation can make low-cost textiles, steel or even computers and pharmaceuticals advantaged by a low labor rate.

As we’ve globalized in the last several decades whole industries have spent less time in their nations of origin as commoditization has pushed the price curve and margins down to levels below profitability. The natural response is to seek places more conducive to production at a profit so it’s no wonder the American core is hollowing out.

Laissez-faire economics might say let those industries go, that it’s just the free market doing its thing. But that results in a race to the bottom that does not reliably result in high wages for a thriving middle class. Something more than laissezfaire and free markets is needed because a healthy economy circulates money while hoarding results in recessions or worse. One person’s spending is another’s income.

The wealthy rarely spend all of their income, that’s why they are wealthy, but the middle class comes very close by spending its income on the necessities of life. If we’re going to have a satisfactory income base for a large middle class, we need to enable people to spend on domestically produced necessities of life so that their spending will circulate.

The American version of the free market is great at supporting innovation and new products and industries. But we’re innovating at such a rate that one of our best exports is whole industries. We’ve been offshoring the jobs that anyone can do while continuing to onshore the jobs of the elite. It’s no surprise that so many people are hurt by the American economy today. It’s a feature, not a bug.