UiPath will finally find its true path as IPO beckons. Now can its leadership develop some humility to embrace this incredible opportunity? 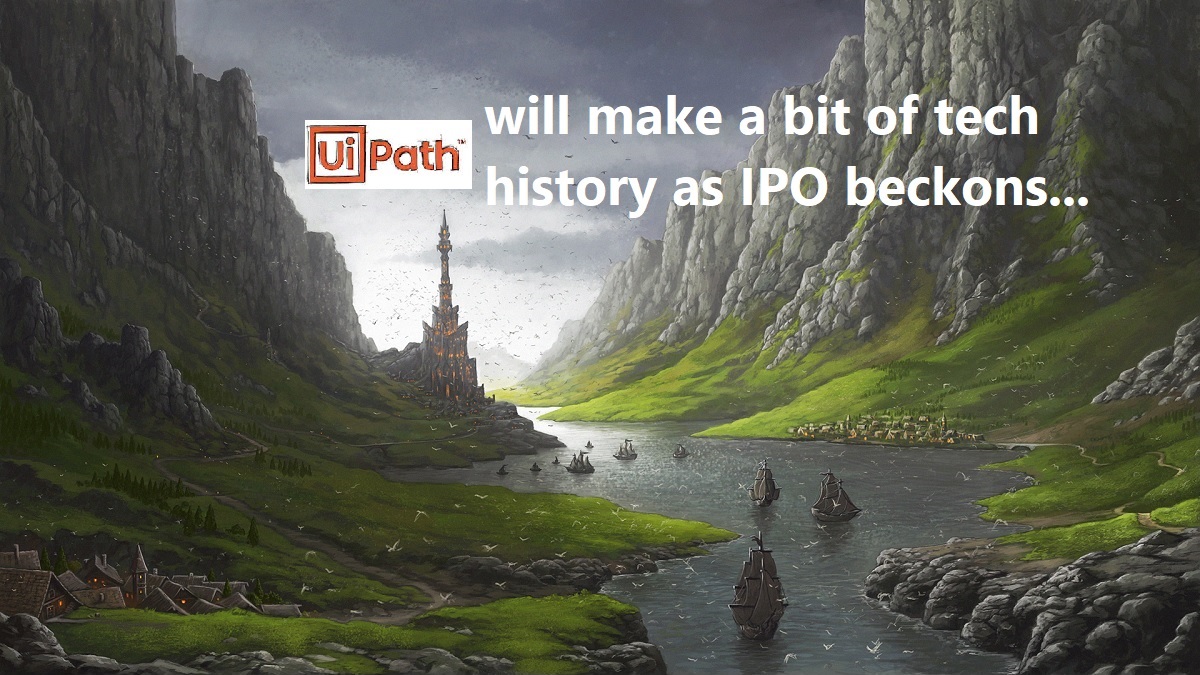 Having introduced RPA to the world in 2012 I have (sometimes grimly) clung to the belief that RPA will eventually find its path to be a vital cog in the enterprise technology potpourri.  Blue Prism opted for the comfort of floating on the London stock exchange less than four years later in 2016, where its founders and key stakeholders opted for a modest payday, rather than make the really bold play of floating in the Big Apple and making themselves known as the pioneer of automation software.  The other two big players, Automation Anywhere and UiPath then proceeded to demonstrate their beauty to the big iron software giants, who all quickly opted to seek out cheap acquisitions to scratch their RPA itch, with SAP, Appian, Microsoft, and IBM all settling for small scale tech additions, rather than making the multi-billion dollar investments AA and UiPath were demanding.  So with only $450m actually being invested in RPA acquisitions from the tech sector, the $ billion+ UiPath has been burning through (and a not-dissimilar amount with AA) clearly indicates IPO is the only realistic path forward for these firms.

It’s easy to blame Covid on many things, such as the negative impact it has had on my performance in cleaning the kitchen, but one thing has been clear:  Covid amplified situations where enterprises were struggling or doing well.  In UiPath’s case,  pre-Covid they tried to force a market situation before their market was ready… all they needed was the patience to wait for their market to open up for them…  in 2020, UiPath far outstripped all its competitors because it has an employee base to upsell, and it made its solutions the easiest for services firms and consultants to implement.

Step up UiPath, your time is now

UiPath’s potential IPO has been whispered about for a couple of years now. But in mid-December Bloomberg reported and UiPath eventually confirmed that it filed a draft registration statement on a confidential basis with the SEC for a proposed public offering of its Class A common stock.  While the filing may be confidential, UiPath is making sure the buzz about it is anything but.  If the likes of Microsoft, Oracle and Saleforces are failing to see the value of acquiring the firm with a very, very effective services partnership strategy and rampant installed base, then it”s time to open up to the public where there is well over $1 trillion of funds just primed for a tasty investment in a tech firm that has captured the excitement of the Global 2000.

Ultimately, IPO is the only path forward for UiPath. It has received more than a $1B in funding and its investors would like some return. And when valuation makes you a “deca-corn” it’s tough to find a buyer. Public markets to the rescue. While we’ve been VERY vocal about our view that RPA is in no way transformative, there is a ton of “now” value to be reaped from helping enterprises prop up legacy for another couple of years.  Their investors have always been very clear that the “now” value of RPA is what makes it investment-worthy. And in a pandemic, clearly more so.

Meanwhile, UiPath continues to invest in its product functionality both organically and via M&A, driving capabilities beyond core rules-only RPA to help it better grapple with unstructured data and support process intelligence. However, HFS sees zero chance of UiPath ever realizing its vision of a robot for every human (which we affectionately refer to as a thinly veiled plan for a license for every client employee) or at least not in its current incarnation which is still predominantly unattended. Microsoft, which just completed the native integration of Winautomation from its acquisition of Softomotive is tracking much more in this direction (Clippy2 anyone?) and has a massive base of desktop users to convert.  Nor is UiPath poised to become the “new ERP” as suggested in their recent 2021 predictions – largely because RPA alone, despite the upgrades, does not possess enough functionality to be the epicenter of process and workflow orchestration that sits atop existing enterprise apps.

As for the IPO path, UiPath has been adding customers hand-over-fist, generating massive growth figures. UiPath would be successful by every measure if they could crack the customer scale code. But that’s the challenge – they won’t. RPA has an expiration date that kicks in with legacy modernization. It doesn’t scale not because it can’t but because enterprises don’t need it to. Enterprises can keep using the same 50 bot license and get what they need year on year.

Bottom-line: UiPath will hold the attention of the industry as it becomes the first public multi-billion robotics platform.  Now its leadership needs to show maturity and embrace reality.

While it’s easy to criticize anyone in a market that is still flying by the seat of its pants, we have to give UiPath credit for outpacing all its competitors over 2020 and finding itself in pole position to IPO as early as next month.  When you consider the only other recent tech IPO was the long-established Cloud firm Rackspace, the market will welcome the market leader in robotics software and make its investors very happy after a  frustrating three years of confusing marketing, fantastical narratives, and an incredibly poor ability to win the hearts of many influential analysts.  But you know HFS, we can dish it out, and we can also take a punch or two.  But we always err on the side of reality, and the reality here is that UiPath will succeed in being the first robotics platform to IPO.  It has become the automation platform for many of the leading service providers, and while scaling has been a real challenge, UiPath is winning that battle.  The company actually refuses to talk to me or my brilliant colleague Elena Christopher because its leadership couldn’t stomach some hard truths we dished out to them pre-Covid.  But that’s OK – if you want to control all the narrative and cannot find the humility to take a few punches when you need to take them, you only need to look at other leadership disasters to see where that attitude takes you.  Huge egos and inability to listen will see anyone fail.  Creating a narrative everyone can believe in, embracing your critics and designing a strategy we call all learn to love if the key to success beyond IPO.

So this is a time to embrace the hard-won success of Daniel Dines and his team to see RPA finally establish itself in the “work from anywhere” enterprise tech stack.  Now let’s hope they can control their egos a bit better to embrace the much more lucrative industry that awaits them.