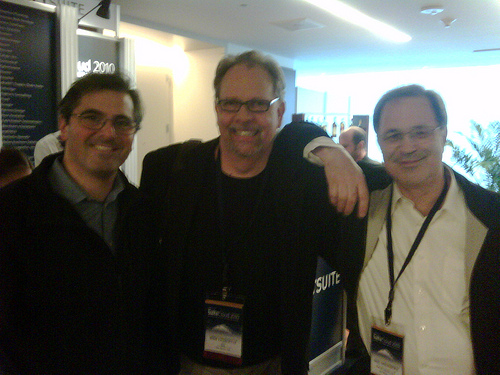 Every now and then, something strikes me rather deeply – deeply enough to emit an outright gasp of an unshaped, almost unrecognizable emotion. Some times it’s flash of insight into a problem or idea I’ve been wrestling with for a long time. Sometimes it’s a welling up of a feeling that leans in the direction of tears but because it’s not clear whether they’re tears of joy, sadness, or something far more profound but indiscernible, it’s-not-quite-that either. The latter whatever it is can be triggered by anything from a movie to a real act of human kindness to a simple human gesture or look that I notice when watching someone else.

I don’t exactly know why these moments trigger these ethereally shaped emotions but they do.

I had one while sitting on the plane from San Francisco back home to Manassas VA about 10 days ago. I imagine I can equate it somehow to SCRM or CRM or something but I think it would be an artificial construct.  I think as you’ll see if you care to read this that it has everything to do with human relationships – at least my human relationships. But please bear with me and understand that if you want to take this any further it’s gonna be kind of rough-edged because I have to grapple with explaining something that was momentary, fragmentary and yet is compelling me to want to publicly say it.

What happened was this. I was thinking about my trip which was highly unusual because I interacted or maybe intersected is a better word 4 vendors in 4 days and with 3 of them in 1 day. Invited to those events were a significant number of analysts and journalists, sometimes with one vendor for the first time – but the zillionth for the second vendor. In some cases, the vendors invited different people, but there was a large overlap that was apparent. I would say that 40% of the journalists and analysts were people I saw in that two days at all three events or at least two of the three.

My role varied from event to event. For SAS’s Social Media Analytics launch, I was “Press” and there via the PR folks; at the SugarCRM SugarCon conference, I was a keynote speaker; at the NetSuite event I was an analyst. Once again a chameleon – fitting an appropriate budget line.

(Update: Since this was written a bit over a week ago – I’ve been in Seattle again and then to Microsoft Convergence 2010 in Atlanta)

But the experiences at these three events in two cities – Seattle and San Francisco – in a way had a certain oddly sublime quality to them. Not because they were great events – even though each of them was in its own way. But because I realized that these folks that I was interacting with were not just occasional colleagues who I saw here and there, but in many cases, friends – meaning people I enjoyed the company of and would have the backs of no matter what in life they chose to do moving forward. And it just smacked me that this was more important than whatever else I could extrapolate from the events. I hadn’t planned on thinking about it that way. Whack.

Some of this had to do with my last December 60th birthday which I was hoping to pass off as not all that significant but its made me think far more than I ever thought I would about how I conduct my life – at all levels.

The environment at these things is always very nice and because we’re considered influencers we’re treated well. Good dinners, private meetings with senior management, access to stuff, a nice pen once in awhile. But it struck me for some reason harder than ever before that these weren’t just analysts, or journalists, or vendor reps. They were people that I actually cared about, people who, over the years, I had forged serious friendships.  For example, I’ve known Angela Lipscomb at SAS, their star PR person, for 8 years – and my relationship to her is not business per se – though there is always something of that – but absolutely personal and something I’m glad for. I saw Denis Pombriant at all three events – SAS, SugarCon and NetSuite and was just simply incredibly glad to see him – not just to bounce biz stuff off of him, but to find out how his wife and kids are – to see what he’s up to – to be available to trade Marx Brothers routines. Or at SugarCon, Martin Schneider who I’ve known for 5 years. Following my keynote there,  Martin escorted me off the stage almost like a bodyguard so I could get upstairs to do a webinar for Pivotal without stopping and chatting. I thought it was kind of funny at first and then realized – hey, I’d actually trust him to have my back if it came down to something more significant- because I knew I could trust him.

I had dinner the night before I spoke at SugarCon with Mei Li, the SVP of Corporate Communications at NetSuite – just her and me. Why? Because I was one of maybe a dozen or so at her wedding and she is one of my closest friends – and a dear friend of my wife’s too. This wasn’t for me getting a contract with NetSuite. I don’t care about those things. This was two friends catching up on what we don’t care to speak to others about.

But it goes on and on.  I think that Brent Leary is not just my partner-in-Playaz but someone that I’m truly glad to know and will be happy to know for the rest of my life. Mike Fauscette, who runs IDC’s enterprise business is someone I’ve known extremely well for 13 years and am simply glad I do – and will.

I have a batch of friends that I’ve gotten to know much more in the last year or so who I saw at these events – among them Ray Wang, who I consider perhaps the smartest enterprise analyst in the business – but that’s not why I like him. I like him because he’s got a great sense of humor and most importantly, a big heart. The guy actually gives a damn about other people. Esteban Kolsky, who is among the brightest people I know, also with a great sense of humor and I don’t know who in the universe could possibly dislike him – he doesn’t have a mean bone in his body. Plus he has a take on things that others just simply don’t. Iconoclastic with a good nature.

But its more than that. I see people at the conferences that I barely talk to but I know enough to give me some comfort that they are there. Brenna, who was John Roberts executive assistant and now Larry Agustin’s at SugarCRM – this year I didn’t even speak with her but have in all my past engagements at SugarCON – but I was comforted by the fact that this always very nice person was in the front row – meaning still there – again – listening to me speak another year. Are we close? No. Am I glad I know her. Absolutely.

On the opposite side of that same spectrum, there are those I knew “before…” Particularly my dear friend Nikhil Hasija, a key thinker on SCRM at Microsoft who I just did a joint presentation session with at Convergence yesterday.  Nikhil and I go back to 1997 when he was the star of a Lotus Notes practice that I was running. He is brilliant and I love him and his family to pieces.  Yet, here we are on a stage at Microsoft jointly presenting on SCRM.  Do you realize how lucky that makes me?  I get to do stuff with my friends – in fact, the way it’s working is that I get to make a living doing stuff with my friends. That is beyond even MasterCard priceless.

It keeps going. There are the senior management of the vendors that I deal with. They’re busy folks. I don’t spend a lot of time talking to them. But, for example, I really like hanging out with Zach Nelson, NetSuite’s CEO.  He’s a cool guy and easy to like. Plus is very good at what he does.

Keep in mind, I’m barely scratching the surface. Not only doesn’t this little paean include those who weren’t at the events but not even all of those who were. It doesn’t include the friends that I have on Facebook – or at least those I’ve gotten to truly know. It doesn’t include the AC – the Accidental Social CRM backchannel – which has about 20 people who I just think are awesome. It doesn’t include Bruce Culbert, who is a member of my family as far as I’m concerned and has been a key CRM influencer for many years. It doesn’t include my practitioner client friends – guys like Scott Rogers who I’ve known for 9 years and is a truly fine human being or….oh, jeez, I could go on and on frankly and wouldn’t complete the list even at 1000 names. It doesn’t include the folks who were at vendors I used to deal with a lot and now are at the vendors I don’t deal with much – but they remain my friends – like Jeff Pulver who was VP of Global Marketing at Siebel and now is VP of Biz Development at Workday.   He’s truly my bud. Or John Taschek at salesforce.com who I read from afar for years and then got to know and am grateful I do.

Enough names though because I could easily keep going.

I realize that I’m treated exceptionally well wherever I go – well beyond the norm – for reasons that I wish I could explain but I can’t. I’m not saying that to show some level of false humility – I really don’t know why people do. But what I do know is that this year, once I passed that 60th birthday, I’ve had a number of these somewhat fragmentary but seemingly organized emotional wellings and a series of revelations that solidified my thinking about who I am, where I sit in this vast universe and what matters to me. All of these revelations and less identifiable emotional upheavals – especially this one – have been related to the personal relationships I’ve established in my life – wherever in my life. They’ve made me incredibly grateful to all these people mentioned here and countless others I didn’t name. To all of them and to all of you who have read my stuff, who have sent and continue to send me these wonderful notes thanking me for what I do – you who validate me every day – thank you so much for all of that – and all of this. I don’t know what I did to gain your trust and support but I promise you one thing – you have mine – always. I’ll do everything I can to be available in any way I can to help. Please remember that – even if I have a bad day, I’ll have your backs.