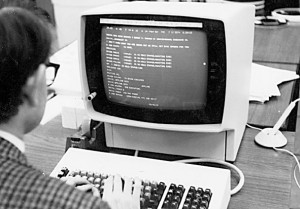 So I’m reading Bray’s blog as usual, and I come across his argument against Flash that I see occasionally–namely, that all Flash UI sucks.

Why?  Here are his words:

What’s not to like, then? Well, the user experience, which in my experience is fourth-rate for anything but games; No “Back” button, feaugh. And of the course the fact that it remains essentially proprietary.

So, I use a Flash-blocker every day, and I am not a friend of Flash inside Google, but none of my arguments have anything to do with being part of the Web, or not.

The closest thing to an explanation is that there is no “back” button.  Hmmm, is that really the issue?  Needing to understand more, I did a search for “Tim Bray RIA”.   Sure enough, I find this article which says:

One of his points is that Rich Internet Applications aren’t worth the hype. He says that web applications are generally better than desktop applications, because they enforce simplicity and support a back button, and that users prefer them.

WTF?  Really?  All this for a frickin’ back button?

When you get down to it, Web UI sans AJAX, Flash, or some other RIA (Rich Internet Application) engine is just like the 3270 green screens of old.  It’s fill in the form and press the “Enter” button (BTW, that’s why it’s called the “Enter” button).  Yeah sure its simple.  Darned right, it doesn’t get much simpler.  And for many things, it’s just exactly the right thing.  But heck, if its the only way to do everything we’re really selling the web short.  It’s the old when you have a hammer everything is a nail.  I just can’t get my head around the idea that “web applications are generally better than desktop applications” if for no other reason than there’s so many types of user interaction that just don’t make sense for a 3270 Green Screen.

Maybe its a Learning Style thing, I dunno, but it’s not for me.  Give me a simple UI where simple makes sense and a Rich UI where that makes sense, which is a lot more places than just games.

One response to “Tim Bray’s Schtick: He Likes 3270 Green Screens as UI”