I went to the RWW Mobile Summit last Friday where in the true unconference style the attendees defined the agenda and developed the conference content at the day transpired. While moderate in size, it was evident in the session proposals that the people attending were mobile insiders with intimate knowledge of the challenges and opportunities the mobile sector is facing.

Richard McManus opened the event with a run down of top mobile trends that, I believe, captured the major trends concisely and through the sessions that the audience layered on a much deeper understanding was achieved. 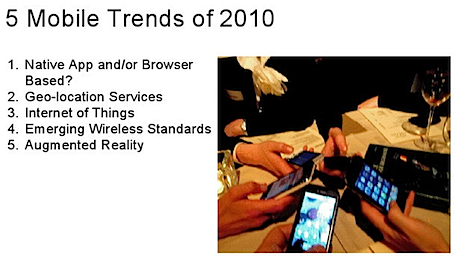 Interestingly, from my point of view, there was very little discussion about hardware platforms, a traditional point of much debate in the mobile industry. In fact, the session on “iphone vs. android” had a grand total of zero participants, even the person who proposed the session failing to show up for it, which only illustrates a broader point that we intuitively understand this is not a winner take all market and are accepting of many hardware options providing the path for building applications on them is not fraught with complexity and peril.

There was quite a bit of discussion about HTML5 and Flash and a consensus emerged that HTML5 had achieved a tipping point moment. Not surprisingly the video guys were focused on this issue as it directly impacts them on the iPhone, where according to Justin.tv a full 1/4 of their new user signups are coming from; I’m not clear on whether or not this was all phone platforms or just the iPhone but either way it is a transformative shift for a company like this to realize a fundamental shift away from the desktop as your primary user experience.

Many of the sessions were focused on business models and revenue streams, and somewhat related to that the exploitation of mobile search and location capabilities for ad and online marketing objectives. I sat in on one session focused on online mobile marketing and was interested to learn how ad buyers still have not shifted away from pageview metrics for ad buying, in other words despite a sea shift in evolution in how consumers interact with online services the agency ad buyers are stuck in 1999. We can scoff at this or accept it and reconsider how mobile services that rely on ad driven monetization are pitched, I’d choose the latter.

A couple of sessions that I attended were focused on user interactions and how, to paraphrase, game system mechanics are gradually becoming a core function in new mobile services. This is most evident in the badging phenomena as represented by FourSquare’s point and badge system.

At their core these game dynamics are about increasing participation in a system through playing off human beings natural desire for recognition in social environments… it’s called social signaling and involves achieving some status relative to online peers. I always think of the success that World of Warcraft has achieved by building a system that involves individual status accomplished through successful gameplay, the advancing through levels and the rewards they bring, and perhaps more importantly the recognition for success through collaboration as part of the game play.

It is the collaboration part of WoW that ensures individual users are simply not cheating their way up the levels as being successful in WoW requires the individual user to work as part of a team (a “guild”). There are many successful ranking and rating systems that rely on individual and group competence, SAP’s Developer Network (SDN) builds in this concept through a point system where you accumulate points for participating and then more critically for how valuable your participation is being rated by your peers. Stack Overflow has a very similar concept and by all accounts these are very effective at ensuring the site not only attracts high value participants by also does not become spammy in the process.

Augmented reality was a very popular topic but unfortunately for me the tables were so full that I could not hear the discussion with the background noise. From what I gathered after the fact the core theme is moving beyond mobile web overlays but I’ll leave it at that and do some research to find out more specifically what was being discussed.

Lastly, the “sensorization” of mobile devices is a prominent theme with location capabilities, movement sensors (accelerometers), and RFID offering developers a whole new set of capabilities as a result of the dev platforms offering third party access to these sensor capabilities. Consumers don’t always think about these functions relative to desktop computing because developers do a good job of hiding the complexity in a “it just works” fashion. Red Laser is a great example of this, relying on the camera functionality to scan a barcode which is then used to drive a “best price” function online.

The emergence of RFID is very exciting for me as I have been following this space for many years and made an early stage investment in Retail Solutions (then T3Ci) which relied on the expansion of RFID in the enterprise. Unlike other many other hardware functions in a mobile device, RFID has no significant penalty in terms of power and mass as the technology is passive in nature. An RFID device comes alive when a proximity RFID transmitter broadcasts power to it or it in a larger device it assumes the broadcast role but does so in a highly frugal manner. The hardware is exceptionally small so mobile devices are a natural application.

RFID has many potential applications but perhaps none is greater than mobile payments. Coupons, prizes, and promotions that rely on RFID capabilities are foreseeable, as is the delivery of proximity advertising that lights up when you device passes nearby. This is very much overlapping into the augmented reality topic, such as with the billboards that use eye gaze scanning to detect when you are looking at them.

I’ll refrain from drawing any conclusions about the event last Friday other than to say it was a great opportunity to sit in a room with people representing diverse interest points who converge on the mobile topic with great enthusiasm and depth of knowledge. I learned a lot during the day and would recommend future RWW events to you on this basis alone.