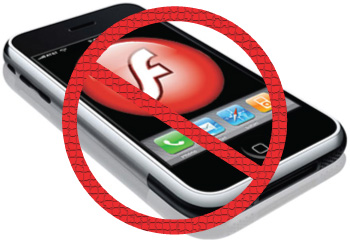 In the spirit of Top Ten lists, here’s Steve Jobs’ “Top Ten Reasons for Rejecting Adobe Flash” (for the irony-impaired, please note that this post is not based on the truth):

#10: Adobe Flash is too proprietary to run on any of Apple’s beautifully open systems (except for all Macs).

#9: Adobe Flash is too much of a power hog to run on any of Apple’s battery powered devices (except for all Mac laptops).

#7: Very few web sites are authored using Adobe Flash, as compared to HTML5 (except for 85 of the top 100 web sites in the world).

#6: Very few iPhone, iPod, and iPad users would like Apple to support Adobe Flash (except for an overwhelming majority, including my son).

#5: The Apple community has, over the years, benefited very little from Adobe’s support (except for just about every graphic designer in the world, who generally use Adobe products on Macs).

#4: HTML5 will someday (in several years) be able to do just about everything Adobe Flash does today.

#3: Someone managed to hack up a very old game to be able to run in HTML5 (in a lab experiment).

#2: Adobe has not backdated any stock options to any Apple executives.

#1: Apple does not need to provide reasons for its decisions about what software they will allow you to run on a device you own.