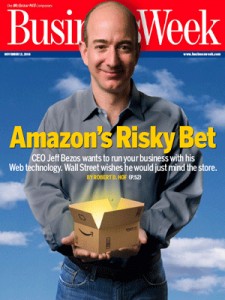 Not so risky anymore. Business Week cover from 2006.

I saw a spate of recent articles that had some pretty amazing statistics and news bits on Amazon Web Services and competitors.   In no particular order:

–  A survey of 600 developers by Mashery reported that 69% of respondents said Amazon, Google, and Twitter were the most popular API’s they were using.

–  Even the Federal Government is turning to the Amazon Cloud to save money.  Sam Diaz reports the move of Recovery.gov will amount to hundreds of thousands of dollars.  We found tremendous savings at Helpstream from our move to the Amazon Cloud.

–  Derrick Harris at GigaOm suggests its time for Amazon to roll out a PaaS to remain competitive.  As an aside, are you as tired of all the “*aaS” acronyms as me?  Are they helping us to understand anything better?  BTW, I think the move Harris suggests would be the wrong move for Amazon because it would lead to them competiting with customers who are adding PaaS layers to Amazon.  They should stay low-level and as language/OS agnostic as possible in order to remain as Switzerland.  Let Heroku-like offerings be built on top of the Amazon infrastructure by others.  Amazon doesn’t need to add a PaaS and they don’t need to add more value because they’re afraid of being commoditized.  As we shall see below, they are the commoditizers everyone else needs to be afraid of.

–  Amazon and Netflix jointly published a great case study and announced Netflix would move more infrastructure into Amazon’s Cloud.  I had a chance to talk to the Netflix folks early on about their Amazon activities.  Smart people.  Amazon needs more big organization and big brand case studies to accelerate their Cloud dominance.  Big loves to follow what Big does.

–  A wonderful post on CNet talks about Goldman Sachs’ findings for the Cloud.  There were a ton of them including:

– A ranked list of apps moving into the Cloud.  Web Conferencing and Salesforce Automation were #1 and #2.  No surprise.  Accounting and Billing were #3, which I found a big surprise, but it only makes sense, especially for billing.   This was one of the fastest growing categories as well.  A lot of discussion among folks I talk to has centered around the idea that particularly accounting might be the last to go because there is little value add, the data is sensitive, yada, yada.

– The majority of SMB’s now have a “SaaS first” policy, they prefer it.  This was only surprising to me as a blanket declaration.  I had seen first hand that SaaS companies no longer spend much time convincing customers, “Why SaaS?”  The market is way past that stage.  Many of the respondents to Goldman’s survey indicated they were using SaaS in this economy for TCO reasons, to save money.

– And now the Amazon bits:  Amazon.com is used by 67 percent of the survey respondents. It is clearly the out-in-front leader, despite being a “newcomer” to enterprise IT. For internal clouds, VMware’s leadership remains pronounced, with 83 percent of respondents using its virtualization technology.  Platform-as-a-service layers are gaining momentum, dominated by Amazon’s Elastic Compute Cloud, or EC2, service, with 77 percent of respondents choosing EC2 as a preferred partner, well ahead of Google.  These share numbers are why the title of this post is that Amazon is stealing the Cloud.  They represent remarkable share and momentum.  They also reflect that, much like SaaS, the world is less and less worried about whether to embrace the Cloud and more and more getting on with it.  The weak economy has really accelerated these trends due to the perception that SaaS and the Cloud are big money savers.

–  UK firm Netcraft finds that the Amazon Cloud hosts 365,000 web sites.  Evidently a number of firms have discovered that web hosting is a great commodity use for the Cloud.

–  PC World asks why Amazon doesn’t charge more for its service.  They conclude that AWS is looking to build economies of scale and set low prices that act as a barrier to entry for new competitors.  Like I said, Amazon isn’t afraid of being commoditized for they are the commoditizers.  Even if they kept their prices fixed, and they keep lowering them, Moore’s Law as well as economies of scale would enable them to deliver the service at increasingly profitable margins.

What does it all mean?

If nothing else, Amazon has a pretty amazing lead over other would-be Cloud competitors.  And they’re building barriers to entry of several kinds:

–  Nobody but Amazon has the experience of running a Cloud service on this scale.  They can’t help but be learning important things about how to do it well that potential competitors have yet to discover.

–  There is a growing community of developers whose Cloud education is all about Amazon.  Software Developers as a group like to talk a good game about learning new things, but they also like being experts.  When you ask them to drop their familiar tools and start from scratch with something new you take away their expert status.  There will be a growing propensity among them to choose Amazon for new projects at new jobs simply because that is what they know.

–  Economies of Scale.  Consider what kind of budget Amazon’s competitors have to pony up to build a competing Cloud infrastructure.  A couple of small or medium-sized data centers won’t do it.  Google already has tons of data centers, but many other companies that haven’t had much Cloud presence are faced with huge up front investments that grow larger day by day to catch up to Amazon.

–  Network effects.  There is latency moving data in and out of the Cloud.  It is not significant for individual users, but it is huge for entire applications.  The challenge is to move all the data for an application during a maintenance window despite the latency issue.  However, once the data is already in the Cloud, latency to other applications in the same Cloud is low.  Hence data is accretive.  The more data that goes into a particular Cloud, the more data wants to accrete to the same Cloud if the applications are at all interconnected.

It’s going to be interesting to watch it all unfold.  It’s still relatively early days, but Amazon’s competitors need to rev up pretty soon.  Amazon is stealing the Cloud at an ever-increasing rate.

9 responses to “Amazon Stealing the Cloud”