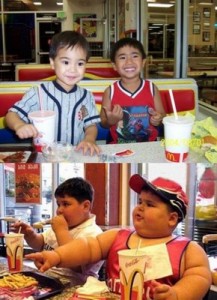 This is the “tastes great, less filling” debate that recurs on a regular basis in the venture capital and entrepreneur communities.

Back in March, Ben Horowitz of Andreessen Horowitz wrote a post called The Case For The Fat Startup, where he outlined some of the reasons why a fledging company might want to consider taking a large amount of funding — a strategy that contrasts with the ‘lean startup’ model that has become common in Silicon Valley. Fred Wilson, another well known VC, countered with a post of his own explaining why Being Fat Is Not Healthy. Today, both men took the stage at TechCrunch Disrupt for a semi-formal debate, where they critiqued each others stances in person. The full video of the debate is below. [From Lean vs Fat Startups: The Disrupt Debate ]

The short answer is that both Horowitz and Wilson are right because the correct answer hinges on a key variable summed up as “it depends”.

The case for being lean:

This is why early stage companies that raise a lot of capital are valued richly, it’s a compromise between the company and investors summed up as “I know you will only sell 40% of the equity but you need a pretty big chunk of capital so we’ll give you $10m and value you at $15m pre money instead of $5m”. At this point it’s all paper valuation because the stock isn’t liquid so achieving an outcome is a function of executing on the business to achieve a next round of funding or selling it.

As you move into growth stage capital rounds the valuation topic accelerates because now the company does have a basis for arguing valuation and the amount of capital increases which ends up moving the needle dramatically. This is the most precarious place for investors because early stage investors can often eek out a small win while minimizing losses, the investors that are putting $15-25 million for a companies valued at $80m and up (pre-money) are much more exposed. I’d be willing to bet that more investors lose a great amount of aggregate capital here than at any other stage.

The case for being lean is also rooted in the belief that it causes the company to have more focus on the variables that position them for a next round of funding. I suppose there is truth to this but there is another side to that coin that ends up impairing early stage companies raising follow on capital, which is that dedicated focus on near term accomplishments opens them up to the accusation that they aren’t “thinking big enough”.

Another point worth mentioning is that not having a lot of capital does not immunize you from making bad decisions… companies with tight capital positions make bad decisions all the time and when they do they don’t have a safety net from which they can recover.

Raising capital is also an incredibly time consuming and involved process, and as investors you have to ask yourself how much time you want the founders and executive team devoting to raising money instead of executing on the business. From where I sit this is the biggest argument again being too lean, it forces you to engage in activities for the purpose of continued survival versus that that lead to prosperity.

The case for being fat:

I feel a Jerry Maguire moment upon me… “the things we think and do not say”. The technology business is like every other business undertaken since the beginning of mankind, the best product doesn’t always win. Tech startups are no different today than they were 10 years ago, they require a commitment of resources to achieve a set of activities which present the conditions upon which revenue is accomplished. Those activities cover the full spectrum and are people powered, and people cost money.

As markets develop they go through a natural expansion stage followed by consolidation. At this point it is a race to acquire customers and revenue, but also market mindshare that positions you as the consolidator of the space or best able to establish the highest valuation multiplier.

The law of accelerating returns kicks in when companies and markets go through these stages, simply put, the more you have the more you get. Product differentiation becomes a tactical exercise and it is rare when a disruptive innovation upsets the market balance because the best capitalized companies can buy their way up the innovation ladder or use good marketing to minimize the disruptive nature of competitive offerings. Capital becomes a strategic weapon for companies to deploy when markets are crowded and on the precipice of consolidation.

Too much money does present problems for companies, most typically when many activities are funded that don’t contribute to execution success for the company or expanding well ahead of where the business is capable of growing. These are better described as examples of bad management than too much capital but at some level they are one in the same. Good management and strong investor oversight should work together to avoid this situation, whereas underfunding a business to create scarcity of capital seems rather short sighted.