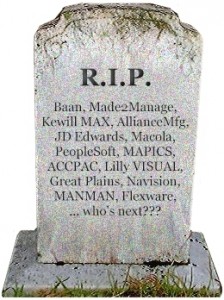 From The Terrific Web Site http://www.erpgraveyard.com/ 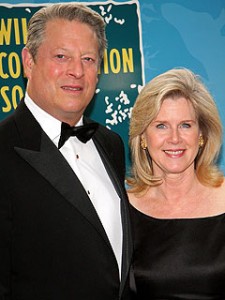 Two completely unrelated conversations over the last week caused that ding ding thing in my brain that happens when the dots connect themselves and I have an aha moment.  One of those discussions took place on a radio talk show I heard while driving to a meeting.  The other was a courtesy call with the HR and IT heads of HR systems at a firm we’ll call LargeFinancialOrg.  The aha is that there’s a great deal in common between the breakup of a long-standing marriage and that of a long-standing ERP/HRMS implementation, to include weighing the sunk costs and comfort with the known against the urgent need to innovate and the discomfort of the unknown.

The first conversation was part of an NPR program on which various experts were discussing their own, the media’s and the public’s reactions to the announced separation of Tipper and Al Gore.  They were talking about the characteristics, back story, and broader impacts when long-standing marriages dissolve, and whether or not “till death do us part” is even an appropriate goal at a time when we’re living so much longer than when those words were first spoken.  Putting aside all of the religious beliefs and moral sensitivities around marriage, not out of any lack of respect for them but just for the sake of this blog post, I was struck first by this weighing of:

I was also struck by the two themes cited consistently as the major contributors to long and continually satisfying marriages.  There may well have been many other points raised, but as I look forward to Ron’s and my 38th wedding anniversary later this month (you’ll have to ask him whether he’s also looking forward to this milestone), these two major themes really resonated:

There was also a lot of discussion about how hard it is to unravel a marriage of forty years, e.g. figuring out how to distribute and/or continue to share the joint friendships and family relationships not to mention the financial and property assets, personal momentoes and even pets.  There are so many personal, financial, real property and other connections developed over a long marital lifetime that just thinking about how Ron and I would ever deal with unscrambling all those interfaces and replacing them in a new context gives me a headache.  And the experts said that this burden of unscrambling, this dealing with the sunk costs,  is often enough, especially in the face of great discomfort with the unknown and absent the urgent desire to innovation,  to motivate long-married partners to try a little harder to reconnect, rejuvenate, and recommit to their marriage before tackling all the unscrambling and knowns that come with divorce.

But the concensus of the experts on this program was that there really does come a point in even many successful marriages where the needs of one of the partners, again often the woman (and here they pointed to hard data), for new experiences, a new sense of herself, a fuller expression of who she is apart from daughter/mother/wife  roles and, yes, a little more spice in her life, makes unraveling all those connections and facing those unknowns well worth the effort.  Even Sally Quinn, one of the experts on this program, who is a long-standing friend of the Gores and is herself in a long-standing marriage, couldn’t explain what lay behind the Gore separation, but she was convinced that the breakup was a good thing in spite of the heavy lifting that divorce would bring.  While some were saddened by the news and saw these changes as fraught with peril, Sally was full of hope that the separation would unleash a new period of vitality, of personal fulfillment for both Al and Tipper, but especially for Tipper.

Deciding if and when to end a long-standing marriage, a legacy marriage, is not a casually made or easily implemented decision.  It’s a much easier decision (and easier for everyone around the couple to understand) to end an abusive marriage, one in which one of the partners is addicted to something unpleasant, or a marriage which was doomed from the start by immaturity, a complete lack of common values or purpose, poverty, etc.  But when a marriage has been a positive experience for both parties, has reaped many of the benefits of such a marriage, and has been woven over many years into the fabric of each other’s lives, many people made of lesser stuff than the Gores just continue to lead lives of quiet desperation, of agonizing unfulfillment, of mild to severe unhappiness rather than do the heavy lifting — and we’re talking HEAVY lifting — of working their way out of this unsatisfactory but well-known situation and taking a leap forward but into the great unknown.  How many have the courage to make that leap?  How many are able to reinvent themselves along with the disolution of their long-standing marriage?  It’s still early days for the post-marital breakup evaluation of Al and Tipper Gore, but I for one admire the courage and grace they’ve shown in moving forward without forgetting the good times or devaluing their long-standing, successful marriage just because it’s not the best fit for them now.

The second discussion was a courtesy call I did with the former client of a colleague who’s retired.  The firm, which we’ll call LargeFinancialOrg, like so many mid-market and larger organizations, has a huge sunk cost in a highly customized implementation of one of the major ERP/HRMSs.  They’re now running on a no longer supported release and have been growing, over many years, one-off add-ons, manual workarounds, inadequate outsourcing arrangements and who knows how many shadow systems to handle all the business needs not met by their core HRMS.  Let’s not talk about the costs of all this nor about the risks they’re taking that they’ll be able to handle the effects of regulatory activism on all things HRM, but at least the ongoing costs are high enough that there’s a push underway to DO SOMETHING!  It’s also worth noting that they haven’t got, by their own admission, anything like the talent management or analytics capabilities that might move the dial on their business outcomes nor have they followed the Yellow Brick Road to create a strategic  HRMDS plan that would give them a leg to stand on in deciding on the right direction under the mandate to DO SOMETHING!

IT at LargeFinancialOrg thinks it’s a no brainer, low risk, low cost move to simply upgrade their ERP/HRMS to the current release, bring payroll back in house (after all, if you’ve outsourced to someone who can’t handle a firm your size/complexity, then of course outsourcing is the wrong move!), and just get on with it.  The two terrific HR/IT leaders with whom I spoke want very much to do something else because they see the huge costs/pain/risks of the proposed upgrade as just getting them to the current release of a legacy, no longer leading ERP/HRMS, not to mention all the unknowns around future vendor investment in that legacy ERP/HRMS as the vendor shifts focus to their shiny new next gen ERP/HRMS.  Instead, the HR/IT leaders would like to move to a next gen SaaS InFullBloom HRMS from a much younger/smaller vendor, but one of impecable pedigree and a growing number of glowing client references.  They’re very clear that their ongoing but legacy ERP/HRMS “marriage” has served them well over many years but that this isn’t the desired software platform for their future.  They’re also painfully aware that doing anything other than an upgrade in place means unscrambling years of interfaces, interconnections, learned customization habits and the skills to implement them, sunk hardware costs and ongoing production expenses that would now be spread across fewer applications thus raising those costs for other legacy application users.  The list of things to unscramble is long and terrifying when looked at without an understanding of the business outcomes that you’re trying to optimize, and they loom much larger in many HR/IT folks than do the potential business outcome-producing benefits of making a major leap forward.  But without a strategic HRMDS plan that builds the business case for innovation and accepting some discomfort with the unknown in order to achieve that innovation, the obvious and very large sunk costs and comfort with the known are really compelling reasons to just stay on the legacy ERP/HRMS upgrade path.

Making a long-standing ERP/HRMS “marriage” continue to be successful requires, among many other factors, two of the themes that the NPR experts said contribute to the ongoing success of long-standing human marriages:

Just as with the unraveling of a long-standing and previously successful marriage, the decision to end a long-standing ERP/HRMS “marriage” isn’t an easy one — nor should it be.  And it also shouldn’t involve castigating the vendor or software that has served us well over many years.  But there does come a time in many long-standing human and software marriages when the case for innovation  is so strong that the discomfort of the unknown, accepting the sunk costs, and the challenges of unraveling that marriage are more than offset by the anticipated and much-needed benefits of taking the leap.  With ERP/HRMS marriages, the business case for making such a dramatic leap must be grounded in achieving the business outcomes of the organization, not just in administrative cost reductions or the desire for something shiny, buzzy and new.

I obviously believe that many human marriages can be successful over the long term, but then I married The Wallace.  If our legacy ERP/HRMSs and their vendors had adapted over the last forty years as well, as quickly, and with such grace to the changes in technology and human resource management, to our changing expectations of what software should do and should cost, as The Wallace has adapted to the changes in our lives, then there would be no need to take the innovation leap with a new software partner.

In the interests of full disclosure, I don’t know Al or Tipper Gore although I did support him for President; we are major donors (major at least without our budget) to WGCU public radio and television, which is the local home of National Public Radio (NPR); many of the current and legacy HRMS vendors, ERP or otherwise, have been and/or are our clients; Ron and I really will be married 38 years on 6/30/2010, and he would say that boredom has NOT featured in our relationship although he might crave the odd moment of peace and quiet; and my recent Twitter exchanges with valued colleague Jim Holincheck made clear why this post was important to write ASAP.