Last week I caught up with the folks at CrowdCast, a provider of Q&A marketplaces for enterprises. CrowdCast secured a $6m follow financing round led by Menlo Ventures in addition to a $3m series A round this time last year.

CrowdCast is interesting for me because it intersects a number of topics I have covered for many years now, the first being the evolution of marketplaces inside of an enterprise and secondly the adaptation of game mechanics like badging, achievement, and competition for business systems which benefit from the adoption of crowdsourcing principles.

Where CrowdCast appears to have departed from previous efforts to implement crowdsourcing inside the enterprise is that rather than being an ideas-like site where anything can get posted and then promoted/demoted by community members, they are building games that are designed to reveal outcomes. In other words, they form every interaction around a tightly focused question that requires an answer and through virtual currency create competition in the form of betting that narrows the result to what is considered the most probable outcome, which is then measured according to what actually occurs over time. 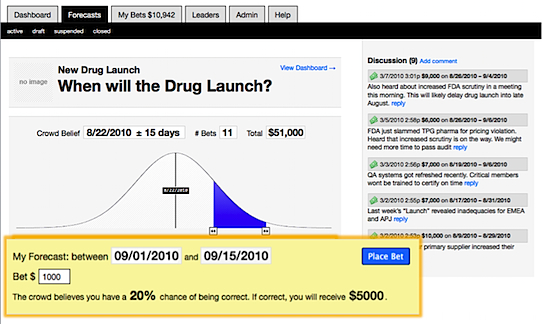 I was a little skeptical about the notion of “social BI” but after talking with the team and seeing a demonstration of the product I am converted. My enthusiasm is tempered by the knowledge that large hurdles, cultural and technical, obstruct CrowdCast from massive adoption in the absence of a lot of missionary selling but I am enthusiastic nonetheless.

The big problem that I see is that enterprises talk about alternative models for acquiring knowledge but actually have a pretty poor track record at implementing them. The introduction of game mechanics no doubt is a big boost to onboarding and making productive participants in this effort but the use cases are still narrow… strategic planning, marketing, and executive level applications.

The last ideological concern I have is that the entire system has a degree of anonymity to encourage negative bets (short sellers which in most markets trend to honesty with regard to a particular valuation position, at least more so than the longs). The problem I have with this approach is that identity and recognition are powerful motivators for people operating within an enterprise context and while anonymity would encourage negative bets they also deprive the participants of the recognition that spurs continued participation. This is either a big concern or a small one, I don’t know but it is a concern nonetheless.

CrowdCast is much more interesting than I originally anticipated and I congratulate the team on building a very unique application and for raising a good amount of capital to grow the company with.

One response to “CrowdCast Brings Game Mechanics to the Enterprise”