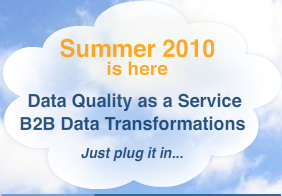 Informatica’s cloud ambitions continue and deepen with each new release. In the three years since its launch, Informatica Cloud, the strategic initiative launched to bring Informatica’s data integration assets to the cloud,  has won salesforce.com’s Best of AppExchange award for 2008 and 2009, added other cloud-based applications as targets, and most significant, signed up 650 clients. Customers like Qualcomm and Toshiba are syncing their SaaS apps with on-premise data, enhancing compliance, and extending their BI capabilities.  In a recent conversation, Darren Cunningham, Senior Director of Cloud Marketing told me that Informatica is processing over 30,000 jobs per day, involving over 6.5B rows of data per month.

Now, with its Summer 2010 release (taking a leaf from salesforce.com’s release model), Informatica is releasing its new Cloud Integration Plug-in Framework, ramping up its efforts to integrate cloud applications to on premise systems – or other cloud applications. This will make it simpler for business units to service their own needs while giving IT visibility and control over the integrations taking place.

Existing PowerCenter customers will be able to move packages to the cloud for execution. Informatica is making offerings like its AddressDoctor validation, which supports 240 countries, available in the cloud. New specific plug-ins targeted to industry standards like Acord for insurance,  SWIFT for financial institutions, EDI-X12 and EDIFACT are available now, and others like HIPAA are likely to come soon. A dozen new plug-ins support Oracle apps, JD Edwards, Microsoft Dynamics, SAP and more. Data Integration as a Service jobs are built in a browser, and when ready can be moved on-premise as secure agents which carry out the work of communicating from on-premise to cloud-based applications.

With several years’ experience under its belt, Informatica has made the  wizard-based interface simpler, and added preview features. Synchronization, loading, replication, deduplication and other data quality management work can be designed and executed in PowerCenter and moved to and from the cloud, depending on the optimal configuration.  Custom SQL support, advanced data preview, and hundreds of transformations are available for moving metadata to a trusted cloud-based location to simplify broad integration and synchronization efforts. The Cloud Integration eXchange (CIX), an online resource to find and acquire “endpoints and processes”, emulates salesforce.com’s community building.

The growing list of targets and sources will drive Informatica’s market opportunity. Its new cloud integration plug-ins will moving the conversation in many shops from “build” to “buy.” Informatica is re-factoring the information value chain,  taking difficult steps off on-site machines and developer task lists and turning them into easily consumed services. The Cloud Integration Plug-In Framework has created a toolkit that allows for the creation of re-usable, standards-compliant black boxes that users and IT can build into their systems simply, without undertaking massive new development projects that require the acquisition of new skill sets.

Disclosures: Informatica is not a client of IT Market Strategy