When I walk into the election booth this coming Fall, I’d love to take out my iPhone, open The Magic App, and click “locate me” to zero in all that data, election coverage, and endorsements for candidates and issues I see on the ballet. Maybe I could even take a short quiz to find my preferences – with questions specialized for my location, of course. There’s plenty of voter guides as always, but I haven’t found (or really looked, to be honest – maybe y’all will tell me what’s out there!) for a mobile app that’s the equivalent of Yelp for government. I mean, if it just told me my voting location, that’d be massive.

It’s harder to hate what you understand

Or, for the arm-chair auditors out there, when walking around all the State of Texas office buildings, I could get info on what they’re actually doing in there, how it effects me, what the total salaries and budget for those buildings are. “See that building, they account for and spend over $50 million a year.”

There’s a huge amount of data about government that’d be fascinating to have on my phone, as I saw, Yelp-style. Government, esp. local and State government is often obtuse and you get a lot of people not really appreciating the good things they do. Like those exit ramps that let us easily get off the highway to a new outlet mall. As I like saying, one citizen’s pork-barrel spending is another citizen’s delicious bacon. 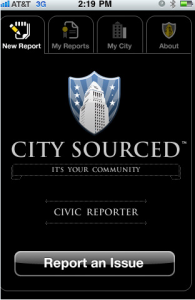 While such an app would have excellent utility for each individual, aggregating the data about what each user does becomes even more interesting and valuable: