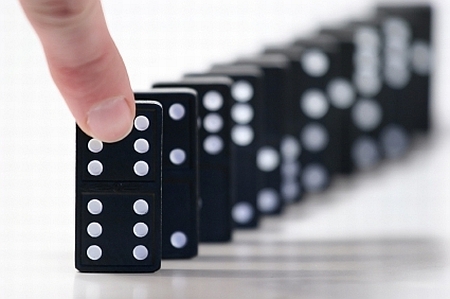 Most managers believe their organization’s investment and project execution decisions are rational and based on informed choice. In reality, bias frequently leads to poor decision-making, creating a domino effect that culminates in failed projects.

[P]rojects with the poorest outcomes came out that way not by surprise, but after a series of interim decision points during which leadership reviewed the major project issues and alternative courses of action, and selected one course they thought would best right the ship.

Harvard Magazine begins a discussion of behavioral economics by exploding the myth of purely rational decision-making:

Economic Man makes logical, rational, self-interested decisions that weigh costs against benefits and maximize value and profit to himself. Economic Man is an intelligent, analytic, selfish creature who has perfect self-regulation in pursuit of his future goals and is unswayed by bodily states and feelings. And Economic Man is a marvelously convenient pawn for building academic theories. But Economic Man has one fatal flaw: he does not exist.

Chris created this chart to link behavioral economics and IT decision-making:

Virtually every major software vendor, enterprise customer, and system integrator has invested substantial resources to create processes for managing projects successfully. Despite millions spent to solve this problem, failures persist and enterprise IT sometimes seems a black hole of waste.

Some observers, such as Roger Sessions, discuss the problem in terms of complexity. Others, such as Samuel Prasad, talk about “human risk factors.”

In fact, human-centric bias is the common thread among all these approaches. Bias is particularly an issue on cross-boundary initiatives, where multiple groups of stakeholders work together on a project. Each stakeholder group has particular goals and is judged against metrics that may be unique to that group. Bias tends to be a substantial driver of project disruption in organizations where goals or metrics across groups are in conflict.

My take. Behavioral economics can help explain the detailed process through which experienced people make decisions that ultimately lead to failure.

You can reduce the impact of bias by managing how stakeholders collaborate and by deploying systematic early-warning measurement techniques.

Photo from iStockphoto. Disclosure: Diamond is an Asuret strategic partner.