There’s hardly a week without a major superphone announcement. Yes, smartphones are so last year, with the iPhone 4, HTC EVO, Samsung Galaxy S..etc we are now in the era of superphones.  I just wonder what’s next?

Could it be … simple phones?   The official terminology for these is feature-phones, but they are anything but…  in fact their key feature is being feature-less. Simple, easy, just providing robust voice calls and long battery life.   Different demographies have different reasons to carry a simple phone:

The Digerati – where’s you’d least expect it.  They like to get the shiniest, coolest gadget.  But these toys have miserable battery life.  Even TechCrunch’s Mike Arrington carries a basic prepaid phone to make reliable voice calls, when his latest toy is out of battery juice, or just outside the coverage area.

The sleek types who’d consider “geek” a stigma. Yes, I know, geek is “in” in Silicon Valley. But elsewhere size still matters.  At least for he type that cannot be seen with a toy that would enable them to actually work… they just bark orders on the phone.  And it better be slim enough to fit a shirt pocket. 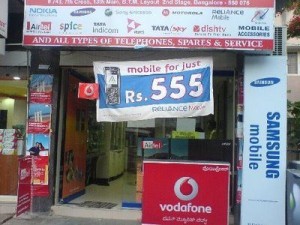 From Kenya to Columbia to South Africa – the kind of places that have built cellphone towers precisely to leapfrog past the expense of building wired networks, which have linked Americans for a century…cellphones are becoming the truly universal technology. The number of mobile subscriptions in the world is expected to pass five billion this year, according to the International Telecommunication Union, a trade group. That would mean more human beings today have access to a cellphone than the United Nations says have access to a clean toilet.

The Elderly.  This is where I have some personal experience. I spent hours and hours of research trying to find the right ‘senior phone’ for my Dad (you know, the 84-year old Google Apps guy:).  It should have good voice clarity without complicated functions. Anything with a touch screen, navigation panels.. etc is out of question.    My Motorola Startac a good 10 years ago would have been perfect – had I not thrown it away thinking it was an

obsolete piece of junk.  Now the industry would love to sell me $200+ devices, like the dominant Jitterbug which is simple, has big buttons, and of course requires it’s own service. Ridiculous. A rip-off.  But I almost gave in –- when I found a perfect solution for $20.

The Motorola F3 (Motofone, pictured at the top) was originally developed for third world countries, but it’s also the perfect senior phone for this part of the world.  Simple, only allows voice calls (technically it supports texting, but it’s such a nightmare, better forget it) , works with my Dad’s prepaid SIM card, and instead of an LCD it has an e-ink display, which is perfectly visible in the sunshine and saves battery life.  It even has better sound quality and shows stronger signal than my previous, more expensive T-Mobile phone. Oh, and it’s fairly stylish, too.