Chatter is Not Social CRM 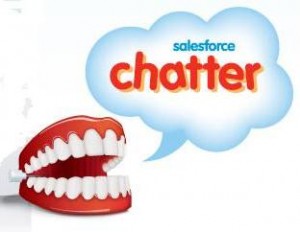 I was talking with a friend who works for an unnamed big enterprise software company, here’s how the conversation went:

ME: Hey, so what new stuff are you guys working on?

HIM: Not a lot, so-and-so wants to build a social CRM product.

ME: Really? I’ve been spending a lot of time in that market, it’s really interesting.

HIM: Yeah it is, so-and-so wants to put something like Chatter on our on demand CRM product.

ME: So you guys realize that bolting on a social feature is not what makes CRM truly social?

HIM: Yeah, but it’s all that so-and-so can talk about.

There’s a huge difference between CRM and Social CRM and being one doesn’t mean you can be the other. There is a legitimate ongoing debate about the nature of social CRM itself, whether it’s a product or a strategy, but for the sake of argument let’s just say it’s a product which dramatically transforms the manner in which you engage with your market and the capabilities are far afield from what traditional CRM products are capable of doing, however (and it’s a big HOWEVER) social CRM does not replace traditional CRM products at all but rather extends and augments them while at the same time building out a distinct product footprint on their own.

I really like Chatter because it is a social layer anchored in the data model that Salesforce.com has delivered, which by that I mean they have built the Chatter feature set on top of the data objects rather than just building a chat product that they offer as a new feature. It makes a ton of sense and should deliver far more value than just trying to copy Yammer.

However, as much as I like Chatter I recognize that this is a social feature and it is not social CRM… they are two completely separate things. Big enterprise software companies don’t have the skillset for building out community based social CRM offerings, which is why they will acquire their way into the market, and this is a good thing because the social CRM market is far too crowded with undifferentiated companies and products which don’t have the capacity to sustain themselves over the long haul.

The consolidation has already begun and by this time next year we will have seen the bulk of the social media monitoring and brand reputation analytics and ideation on R&D and product/project management acquired by larger companies.

10 responses to “Chatter is Not Social CRM”