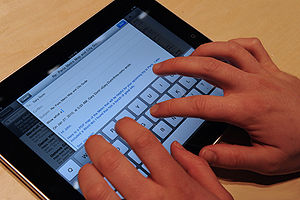 I’m ready to concede that my prediction that the iPad would be a dud is flat out wrong. I will, however, couch my concession with the observation the iPad has, at least not yet, fundamentally changed the way we use the Web but rather it has added a very powerful new way to use the Web. The iPad has been additive to the market, and while strongly disruptive it is not transformative, but whether Apple sells 10 million iPads next year or 25 million, even though the limited time in the market makes it difficult to predict, it is safe to say the number will be very big.

The iPad does not appear to be cannibalizing Mac sales, according to recent sales statistics released by Apple, however it is evident that the device is depriving Apple of additional iPod sales, which on balance isn’t a bad thing considering the disparity in price points. The fact that iPad users are also a robust Mac segment underscore two important points, the first being that an iPad isn’t very useful without a computer to tether it to from time to time, and iPad consumers are so far loyal Apple consumers who have multiple products from the company.

One area that Apple is seriously impairing competitors in is the netbook category, which I predicted would not happen. Clearly we see a shift in netbook consumption going in favor of the iPad, which confirms something we already knew about netbooks which is that they are compromised devices that serve as something people use in addition to a desktop or laptop computer, and something we didn’t know about the iPad, which is that the market has accepted the iPad as a true multi-purpose device rather than just a better way to surf the web or take advantage of mobile apps.

I will offer a cautionary note on the netbook numbers, which is that this market moves in relation to the school year so before we call the ball on netbooks vs. iPads we should wait until the back-to-school shopping season gets fully underway to see how the price differential impacts device sales in each category. I think we will ultimately see that iPad sales accelerate as the new school year approaches but in this economy it’s worth waiting until the numbers actually start coming in.

Perhaps the most powerful contribution that the iPad has made is that it has broken the Curse of the Tablet and unleashed a new generation of devices that embody many of the most significant characteristics of the iPad, the form factor and application characteristics. Cisco’s recent product announcement, along with the many Android tablet announcements underscore how influential the iPad has become in shaping competitive product plans.

During the demos of the tablet, the most remarkable aspect was how interactive the Cisco tablet experience will be, compared with the hottest tablet out today, the Apple iPad. Cisco is building a device around collaboration, not consumption, which makes sense given how collaboration is a big focus point for Cisco and for getting work done.

[From Cisco Crams Its Broad(band) Ambitions Into an Android Tablet]

Lastly, no I am not an iPad user and I don’t plan on becoming one, in fact I am even ditching my iPhone for an HTC Incredible (as soon as Verizon ships it to me). Apple is no longer the company I used to love, their business practices are increasingly vindictive and petty, examples of both aspects very well documented. While I will remain loyal to their laptop computers because they are hands down the best available but I really hope the company devotes engineering cycles to overhauling this product line as it’s getting a little long in the tooth. I will buy a tablet at some point but will look first to the many Android offerings that are in the pipeline, and I am very interested to see what HP does with the PreOS in a tablet offering.

One response to “iPad Revisited”