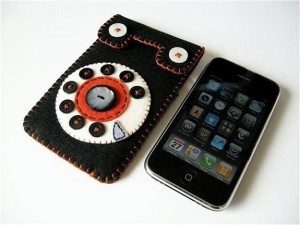 I’d like to take a moment to say a huge thank you to Steve Jobs and the iPhone 4 product development team. I know they’ve been taking some heat recently for the so-called problem with the wrap-around antenna (there’s lots of coverage on Techmeme), but I’d like to salute their courage and resourcefulness. They’ve created an elegant and face-saving solution to what was always for me the phone’s fundamental design flaw: it’s just too damn slippery.

When I first saw the iPhone 4 unveiled, I could hardly believe the specification. Polished glass on both sides, metal trim round the side and an impossibly slim profile. How was I ever going to grip that in my sweaty palms? I know Apple designs its products first and foremost to be looked at and admired rather than used, but I have a more utilitarian attitude to technology. I love the user interface, but as soon as I bought my iPhone 3G two years ago, I wrapped its silky smooth body in an Incase rubber cover and slapped a Power Support Crystal film on the face. I was petrified of dropping, scratching or otherwise ruining it. Safely sheathed, it’s stayed out of trouble for all that time. The rubber case is torn and frayed by now, but despite several heart-stopping slips and falls, the phone itself remains flawlessly intact. 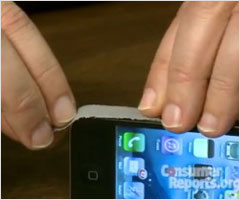 I wouldn’t upgrade to an iPhone 4 without taking similar precautions against inevitable mishaps. Yet how could I possibly justify covering up such sublime beauty when it’s clearly designed to be ogled and admired at every opportunity? That’s when I realized how clever Apple’s designers have been. This antenna problem isn’t a flaw, it’s a feature â deliberately introduced at the last moment to provide a face-saving explanation for accident-prone users like me who have no choice but to keep their iPhones sheathed. Now it turns out everyone is going to have to put a cover on their iPhone 4. Even a strip of duct tape stuck down the side is suddenly cool, and there are rumors of an electrical fault introduced to selected units to strengthen the rationale for rubber insulation.

So thanks, Steve and the Apple team for your foresight and self-sacrifice in introducing the antenna fault when you realized you’d made the iPhone 4 too slippery. I know you’re taking a lot of flak for your decision, but I’m one satisfied customer who’s going to rush out and buy this new model â plus rubber casing and anti-scratch film â just as soon as the all the fuss dies down.