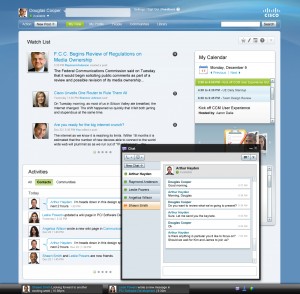 If you remember a couple of years ago, I did my Companies to Watch 2009 posts – and, if you remember (and I’m sure  you don’t. Why would anyone but me remember? And I barely do), I included Cisco as a company to keep eyeballing. Here are some excerpts of what I said:

Cisco – This is the company that’s the biggest surprise and the least surprise. For the last two years, the company positioning itself as “the human network” – and using one of my favorite songs in the world – Baba O’Riley by The Who (also used onCSI:NY) for the marketing – has been placing itself into position of being an all purpose end to end set of applications, hardware, software and process engines for engaging the social customer. Not only did they link up with Oracle CRM on demand via their WebEx organization in 2007, but they’ve been building and modifying a “Unified Call Connectors” for integration with Microsoft Dynamics CRM or salesforce.com since 2006. But it goes so much further than that. Oh so much further. In 2007, Cisco purchases two social networking properties – FiveAcross, a socnet platform and tribes.net – more of a community aggregation site.  These acquisitions led to their announcement at the end of 2007 of Eos – an entertainment operating system – that’s designed to deliver rich media experiences across communities.  In February this year,The Sports Museum of America announced their use of Eos.  Even better, the Yankees are using Cisco as the technology backbone to power the fan experience at their new stadium using some remarkable innovative future-looking fan friendly mobile, high def and interactive capabilities – But of course, sigh, that isn’t enough.  But there is so much more to Cisco’s play. They have succeeded quickly with Cisco Telepresence – a phenomenally well done holographic sort of technology that allows meetings between any groups in the world from any locations in what seems to be projection a la holodeck. It has been wildly successful.  Check out this video for a mindblowing look at it.  But Telepresence and the Yankees, while incredibly cool, isn’t the reason they’re included. Under the aegis of John Chambers, they’ve organized their company culture and structure to make sure that each employee not only has access to management but are empowered to present ideas and follow through on problem solving both internally and externally. They have a democratic culture that actually is organized around innovation.  They emphasize organic leadership for that innovation and encourage the use of social media and social networking tools to facilitate that leadership. They understand their internal customer – the employee – as well as they understand their external customer. Their number 1 ranked internal blog is about collaboration.  The combination of this open and democratic culture, the positioning as a leader in the “human network,” the integration of Oracle CRM on on demand into their portfolio and their obvious interest in CRM via the Unified Call Connectors, their social networking acquisitions and how they’ve integrated them both into their portfolio and into their day to day corporate culture, and of course, we can never forget their dominance of the enterprise router business, position these guys as a company we could see emerge in 2009-2010 as a significant leader in social CRM.  My only concerns in that regard are that as of now, these don’t seem to be part of a coherent strategy to be a leader in world of the “customer engagement” infrastructure. They are just pieces of a puzzle that happen to fit. So perhaps, Cisco is content with doing all this to be the #1 player in the $50 billion router business – and that wouldn’t be a bad thing. But if they see how the whole puzzle  fits together (not just the pieces) and can present the vision – they could be a major surprise…