In a recent post I discussed Oracle’s market share in BI, based on a press-published chart taken from IDC data – showing Oracle coming in second. As often happens in such discussions, I got quite a few direct emails and twitter messages – some in no uncertain terms – about why the particular metric I chose was not sufficiently nuanced or representative of the true picture. I freely admit: that’s true. In general, market observers know Oracle is not typically placed second overall – but the picture is more complex than a single ranking. My point was, and is, that it’s too easy to slip into a “who’s on top” mentality that obscures true market dynamics. In this post, I’ll dig a bit deeper, and describe what different approaches or categorizations show us – and what they don’t. Finally I’ll talk about how much this matters – and to whom.

Oracle BI Platform share ranks 5th in this analysis, and if everyone’s growth continues at the same rates shown in column 5, there would be no change in the ranking this year. That’s clearly not what any of them has in mind, and all have been making moves. The catalyst for my first post was Oracle’s new version and aggressive plan for OBIEE. IBM has shown a similar focus on BI promotion and product  release recently. For SAS it’s been business as usual, and all is well, if flat. SAP has been and will continue to be very busy with some other matters, although it has been aggressively promoting Explorer and will have a new launch soon. It had its first decline in some time during 2009, off a spectacular growth percentage the prior year,post-acquisition. Microsoft’s doing many things at once, and its BI story has not generated a strong, persistent message with a clear center, as I noted in a recent post. Its launch of the new Office, SQL Server and SharePoint versions will likely drive some growth.

Let’s look at a different sector of the market – what Gartner calls Corporate Performance Management suites (CPM). There are different descriptions of this depending on who you talk to. For now, let’s focus on how Gartner measures the market, drawn from the same sources cited above.

In this chart, we get an entirely different result: Oracle is the leader. And here also, SAP’s revenue was down slightly off a big prior year. Microsoft is not on the chart at all. SAS is flat. And IBM is growing a bit faster than Oracle, but off a smaller base, so not a great deal of change is likely in this sub-market if trends remain the same. This large Oracle share, driven by the Hyperion Planning tools, has a corresponding impact on the higher-level aggregate picture I showed in my prior post – even if much of the revenue there is maintenance, not new licenses.

Another View From IDC, and Sudoku

IDC’s market model is different. This is no surprise; one of the ways research vendors differentiate is by having different takes on the market. The vendors are no help, given the opacity of their reporting. They don’t reveal product-line revenues, or even groups of product revenues, in any comparable way; the public ones’ required financial filings are usually at Division level or even higher. The carefully negotiated data they confirm (or choose not to contest) from the research firms can’t be checked, except by seeing if all the numbers add up somehow to the reported ones. Hints at vendor press events about “x% of this category was on platform y,” or “…in geography z” or “…represented 14.6% of the non-GAAP overall growth of 37.8%” are carefully compared, in between bouts of pulling one’s hair out. Pity the market share analyst; think of it as a game of Sudoku, using revenue numbers that are partly revealed. Still, there are lessons to be learned, and eventually an agreed-upon picture emerges.

Notice that in this rendering, Oracle is fourth – and its growth, at 2.6%, looks like the growth in the Gartner BI BI Platforms chart. But the differences in the revenue numbers between the two charts reflect significant variations in definition. SAP’s 2009 numbers are almost identical – $1557M in IDC’s chart and $1548M in Gartner’s. But IDC credits IBM with $1224M, while Gartner counts $876M. Oracle gets credit for $719

Where is the additional IBM revenue? In the 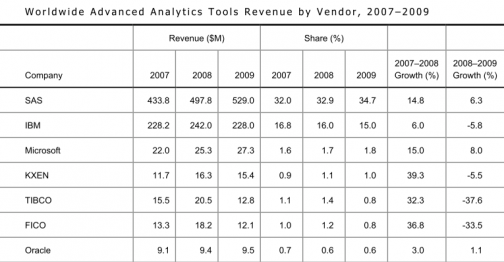 Advanced Analytics category. By IDC’s reckoning IBM, with – you guessed it – $228M, which used to be labeled SPSS, comes in 2nd in that category to SAS.  (SPSS was struggling to compete with SAS when IBM acquired it well into 2009; the impact has not begun to show yet in higher growth.) The $228M neatly fits the additional revenue that showed up in the overall BI Tools chart above. Oracle plays in Advanced Analytics too, with a distant 7th place finish based on $9.5M in revenue. SAP didn’t play there at all in 2009 – looks like a portfolio gap.

Finally, there is another IDC category found in Financial Performance and Strategy Management Applications 2007-2009 Vendor Shares. FPSM corresponds partly to the Gartner CPM category above. In IDC’s accounting, Oracle’s lead over SAP is a little smaller, SAP’s growth is a little higher than Oracle’s, and IBM lags a bit further behind, although its growth in 2009 is best on both charts.

There’s at least one good thing for almost all of these vendors to point to somewhere.

SAS appears on every one of these charts, and continues to execute steadily. Being privately held, it’s even more opaque than the others, and the Sudoku game is of a higher degree of difficulty. Colleagues of mine have said they don’t see SAS in some of the categories nearly as much as their numbers might indicate – and the more skeptical among us wonder whether the real distribution of revenues is different from the final agreed numbers in reports like these.

There’s much more detail, and rich analysis, in the full reports; if you want to know this much about the market, get these reports from IDC and from Gartner. They provide a great deal of color, discussion of market trends, and so on, that is well worth your time, and the analysts concerned are friends and colleagues whose work I respect enormously.

I’ll be blunt here: with respect to the vendors I’ve discussed, if you’re trying to make a purchase decision, these rankings mean nothing to you. None of the majors is struggling with its viability, or currently trending down enough to be questionable. An investment you make in their products is not “at risk” because they are 3rd instead of 1st – that’s not how or why you ought to buy them. If their product fits your needs, and the price is acceptable, buy it. Put 2009 in perspective: it was an odd year, especially in light of longer term trends. How much of the change was due to economic conditions and differing ability to respond? How much leverage will each of the majors get out of its acquisitions in the last 2-3 years? This year will prove a truer test, as conditions have improved, integration projects are wrapping up, and new versions are coming to market.

They do. The numbers are good for bragging rights from a marketing perspective.

Gartner and IDC care too, because the people who spend money on these reports are the vendors themselves.

But the data is also tactically useful to vendors: in drill-down levels of analysis not shown here, they are helpful for targeting which competitors to attack, industries to focus on, geographies to boost, and channels to invest in. This is a paradox: even though the numbers tend to come from the vendors, the model built by analyst firms becomes a source for planning in vendor marketing and sales groups. (Though the big firms have massive staffs doing very sophisticated work I’ve occasionally been privileged to see.)

I spent the time to put this post together in part in response to questions about just where Oracle sat at the end of 2009, before launching OBIEE 11g. I spent more time on it than I planned to, because I realized that outside the research industry some of the sausage-factory work is opaque, and it might be interesting to some of my readers. And finally, as an analyst, I’m also one of the ones who cares about this. I want to watch the dynamic play out, see how the products, strategies and tactics fare, and this is a scoreboard for me that serves the same purpose as it does for the vendor marketing person putting slides together: it gives me something to talk about. Hope you found it useful.

Disclosures: IBM, Oracle and SAP are clients of IT Market Strategy.