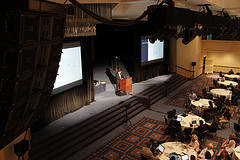 I have to start this by saying I am biased when it comes to this conference. I chair it and I love working with the people at CRM Magazine.  They are a genuine joy to get involved with.  So, you can temper my remarks all you want. However, that said, there is no veneer on this post – sheer matte is what we’re dealing with.

Before I get into a look at the conference itself and what I saw and heard, there is a backgrounder necessary.  For the last few weeks, I’ve entirely informally (which of course increases my chances for a misstatement) looked at the enterprise software/functional communities.

There IS a CRM industry community that can actually be defined as one. That would be as opposed to an ERP community or a financial services community or a supply chain community.  It is an organically stable entity that is palpable in its conscious interactions.  In other words, it acts as a community. One that is recognizable.

To simplify that, there are hundreds, maybe even thousands that interact regularly who represent thought leadership, vendors, practitioner companies.  They know each others names; they correspond online and party together offline; they battle out ideas with each other; they gossip about each other; many have become personal friends, while others remain business acquaintances. There is an atmosphere that overlays this community – whether I’m speaking of its digital or physical presence – it has a presence.  Like any other real community it has fringe elements and people within it who are disliked, though they truly are fringe and a real small percentage. Thing is that its a community though that in general has each other’s backs.  When people go unemployed – other members of the community step up and try to support them – and its not a small amount of people – and typically isn’t only the group that immediately surrounds the temporarily jobless individual.  If there are senseless attacks on people in the community (this happened to me), the folks in the community rise up in defense – rather aggressively sometimes – of the attacked person.

This community has a specific character because its built around a thriving industry segment – one that actually somewhat weathered the recession.  The business is expected to be between $13-$16 billion next year so there are substantial stakes for many – make that most – of the members of the community, which makes the collegial nature of this group all the more wonderful.

Its an expansive bunch too.  In recent months – probably the last 12 really – there is an influx of social immigrants into the community – which had historically been something of a traditional CRM nature. The new residents are from the social side, tend to be younger and very forward thinking and not as well acquainted with the enterprise as the older group. But, know what?  NP.  Everyone is welcome who wants to be a part of it and this year at the CRM Evolution 2010 – the social side was represented really well and frankly enriched the entire conference – as the noobies enrich the entire CRM community.

The reason I’m talking a little about this is because this community was integral to the success of the CRM Evolution 2010 conference.  Without that community and their willing participation in the events of each day, this would have been a bust – even with the incredible efforts of CRM Magazine and particularly David Myron – I’ll get into that in a bit.  But back to to the community.  What made it just soar this year – even better than last year – was that members of the community from thought leaders to vendors to practitioners were providing the content that just made this thing RICH.

Now if the content was presented to only other members of the community, then it would be self-congratulatory and pretty much not a success – or let’s say, a limited success.  But there were 859 attending, many for the first time and many to learn – who were not known members of the active CRM community.  That’s a good thing. A real good thing.

The community came to NYC and was the underlying glue for the conference – and noticeably so.  Thank you for that to all of  you – you know who you are.

Okay, now onto the conference itself.  First some bulleted tweetable observations.

Jeez, man, the content was great.  Keynotes by Emily Yellin and Dennis Pombriant were just profoundly educational and outright interesting.  Emily has a way of taking what actually is pretty complex when it comes to the interactions between customer service representatives and their customers – and making it obvious about what one should do – even if you have the technology to do otherwise. She drove home a fundamental message – whatever your business imperatives, whatever your available technology and willingness to invest in new technology, the best thing you can do for a customer and, thus, for yourself as a business, is treat that customer like a real human being with emotions. As she put it, “you have to infuse what you do with humanity.” Aside from her great stories, she drove home the point when she distinguished between providing value and having values.  Of course, for me to hear that is awesome because Principle of CRM #1 is “value and values are given and in return, value and values are received.”  Emily and I are joined at the hip there. For more on her speech – go here.