Periodically, one hears about “Game Dynamics” as part of the User Experience.  It’s proponents will tell you Game Dynamics can make any UI more compelling and get more people to participate.  What it’s all about, in a nutshell, is the “Gamification” of your UI, so it seems more like playing a game and less like doing some sort of work.

There are lots of manifestations of Game Mechanics out there.  Many Social software products award points for participation, for example.  With these points come exalted titles that reward the participant, spurring them on to even greater participation in order to garner more limelight.  Proponents will tell you that with points, you can get people to do ANYTHING.  I don’t know about that, but they can be helpful for some audiences.

There’s a lot more to it than mere points, however.  In fact, there are lots of different Game Mechanics possible.  That’s a good thing, because I’m in the camp that wonders if the simple points systems aren’t getting a bit long in the tooth.  Let’s try to get comfortable with the notion.

I’m fond of saying that there is no special Dark Art ot Social Media, because its just people.  Figure out the Bricks and Mortar analogy, and you’ll understand how to maximize the Social version, provided you’re good with people.  Twitter is like those tragically hip NY night clubs where people go to get a glimpse of the glitterati and maybe meet new people.  There’s tons of energy, but it’s really hard to hold a real conversation there. 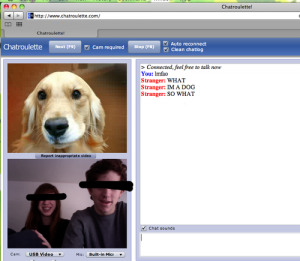 So it is with Game Mechanics.  Think of a game that’s popular and fun to play, and you can imagine Game Mechanics that are analagous and might work for software.  Well, almost any game, I still haven’t figured out how we do it with Twister, but maybe that’s what Chatroulette is all about, eh?  Sort of a Social Twister that’s all about random, and sometimes uncomfortable juxtapositions.

Now to the title of my post, about Game Dynamics being pretty old.  Take E-Mail, for example.  Why is it such a time sync for so many?  Because it has crude Game Dynamics.  If I had to pick the game it borrows from, I’d say solitaire.  People get a sense of accomplishment by moving things from the Inbox to the Outbox that is not unlike playing solitaire over and over again.  As productivity experts will tell you, this isn’t really all that productive.  But we like mindless tasks that make us feel like we’ve accomplished something, however trivial it might be.  Wouldn’t it be interesting if E-Mail had Game Dynamics that awarded points on the basis of useful things we did with the E-Mail?  Perhaps that would change our behavior.

This idea that completing a series of small tasks that seem like drudgery to get to some exciting end game (my inbox is now empty!) was around long before E-mail came onto the scene.  Remember trading stamps (I’m dating myself now!).  Once upon a time affinity programs involved trading stamps.  You stuck to the grocery store chain that had your trading stamps.  Gold bond and other brands were available, and you got some in proportion to the dollars you spent at the store.  You went home and pasted them into these little books.  As the books got filled up, you could redeem them for various rewards.  That’s Game Dynamics, folks.

What about this mad business of “Following” on Twitter?  People don’t seriously have thousands of friends.  Many wind up following so many their Twitter stream gets to be useless and unreadable.  Those followers are just game points.  It’s like a collecting game of some kind.  Before the computer, we collected all sorts of things.  People still do.

Imagine what it would do for a service like Twitter if we learned something each time we collected a new Follower.  Something significant.  Sort of like stamp collecting, where we learned about geography, foreign languages, and all sorts of other fascinating stories based on the idea that each stamp had a story to tell.

Civilization did a beautiful job bringing that kind of collect-or-earn a-thing-and-learn-something-new learning experience to life.  Simulation games, in general, have tremendous potential for driving Game Dynamics to make otherwise dull software and marketing more fun.  Imagine a simulation where the players do something really fun, but to win, they have to learn some things about your products.  It wouldn’t work for every kind of product line, but for some, it might be just the thing.

These things take many forms.  It’s interesting to try to mix and match.  Take a sheet of paper and draw two columns.  In the first column, list popular online services.  Twitter, Groupon, Foursquare, and so on.  In the second column, list games or other leisure/hobby activities like stamp collecting that qualify.

We sort of mapped Twitter to collection games like Pokemon or Beanie Babies (LOL).  Take your two columns and start exploring random combinations for ideas.  Facebook + Stratego?  Hmmm, aren’t some of the Social Games not unlike that kind of combo?

What else might we randomly connect to get an interesting outcome?

As you’re working through combinations that might work for your application, be sure to consider your audience (I know, even I am tired of hearing that advice, but it’s true).  Are they willing to invest a lot of time in your game?  If not, you better keep it simple.  Your application + Chess might not be a good idea!

Do they want to move a lot of little rocks from one side of the road to another to get a reward?  OK, that’s the E-Mail or points on Social Media type of game.  But, if they want surprises along the way to reward them, that’s more like drawing cards or winning Civilization Advances.

The main thing is to make it fun, and not to be too much in their face with what you want them to do.  That should come about almost as a side effect that is unnoticed or it will all seem too contrived.

2 responses to “Game Dynamics for UX: It’s Older than You Think”