What Next HP, Acquisition by Oracle? 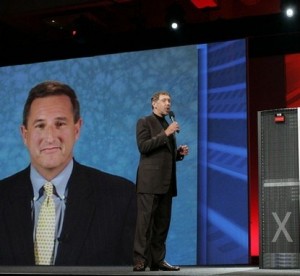 The spectacle of Hurd’s ouster at HP is making the rounds, and what a mess it is.  The self-righteous are shaking their heads and smacking their lips about the tremendous wrongs done by Hurd and the courage of the Board for standing up for what’s right.

Well okay, a few are in the self-righteous camp.  FWIW, the folks I spend time with are more in the “WTF was this Board thinking?” camp.  It isn’t clear even what happened.  First it was sexual harassment, but the apparent victim says nothing happened (though supposedly she got a settlement of some kind).  Now it’s about bad practices surrounding expense reporting of some kind.  Let’s face it, it’s a soap opera and we’re probably never going to know what happened.

But, there are some things we do know.  For example, HP’s Board has a track record of ousting the last two CEO’s.  You’ve got to believe Carly is chortling about this latest (Schadenfreude) and has reached out to Hurd to tell him she told him so about that Board.

I have to say, it does look bad for the Board, just on the basis that we’ve now lost two CEO’s.  If one of my dev teams hired an engineer, and had to let him go, I would tend to assume there was a problem with the engineer.  If they hired two engineers and let both go, I would start to assume there was some problem with the team.  This has happened, BTW, and I hauled them off to beers to talk about it in exactly those terms.  They were somewhat shocked, but it needed to be done.

Who will take HP’s Board out to beers and ask WTF?  As a shareholder, I’d sure be wondering.  Now I’ve got to find a new CEO, and I’ve got to wonder whether I need a new Board too.  That’s an awful lot of high risk turnover.  But will a great CEO want to join HP?  I suppose it’s too great a prize not to.

What sort of CEO is needed?

Fellow Enterprise Irregular Larry Dignan says the next CEO needs to be all about Growth and Vision, not Cost Cutting.  It’s an admirable goal, but the CEO can’t deliver all the Growth and Vision.  Does HP have a Growth and Vision culture?  I asked the assembled Irregulars to tell me the last example of HP Innovation they remember and I didn’t get a single response.

For a company the size of HP, the only real Vision that makes much sense is an acquisition plan.  Vision is needed to understand how to finish the jigsaw puzzle from the available pieces and create a coherent M&A strategy.

This is fraught with peril and will take a long time.  First we have to try to find such a CEO, then they have to formulate a vision to maximize HP’s strengths, then they have to execute it long enough to deliver results.  What’s that going to take, 5 years?

I read with interest Larry Ellison’s view on the whole matter, which can be summarized as letting Hurd go was the dumbest board decision since Apple fired Steve Jobs.  On hearing Ellison and Hurd were friends, this immediately sparked the conspiracy theory that Ellison might hire Hurd to join his team–it would create an instant Succession Plan.

True enough, but I wonder how much Ellison thinks about Succession?  What he does think about is acquisition.  What an amazing move it would be for Oracle to acquire HP, and have just the man to run this new division in Larry’s friend.  Solves a lot of problems for a lot of people.  Shareholders get their value bumped back up.  Leadership is back in place.  Larry has Succession.  Oracle is huge-er,  a real powerhouse, and they get to buy when HP is at a disadvantage, not to mention having access to a guy motivated to work on Oracle’s behalf who knows where all the bodies are buried at HP.  Really, the only ones who ought to object are HP’s Board, because they’re out of a job.

Is such an acquisition even possible?  Well, as I write this, HPQ has a market cap of $99.4B while ORCL sits at $122B.  Not easy, especially if much of a premium has to be delivered.

It does make you stop and think though, doesn’t it?