Business Software is in need of some leaps and bounds!

Most business software is created to help you do what you do today, in the same manner, but hopefully better, faster, and with less effort. Efficiency is the siren call.

But alas, the usefulness and ROI of upgrading have a diminishing rate of return. After x versions of word processors, after y versions of browsers, big company ERP systems now in version z, can you imagine any gain at all by upgrading? 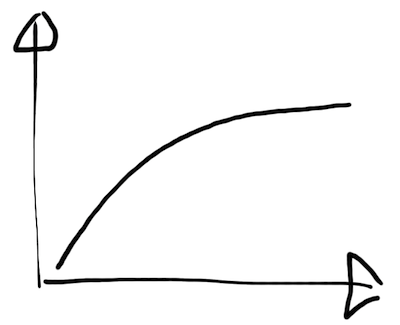 Of course the vendors are aware of this, shifting their R&D spend towards delivery methods and technical tweaks to deliver speed and simpler consumption: The Fast Food Strategy for Enterprise Software.

But there is another kind of curve, the results of doing things differently; when we moved form horse to car, from hunting to agriculture, when the assembly lines were introduced, when electricity became widely distributed and people changed their ways and let machines do much of the manual labour. And indeed, when the first word processor was introduced. That curve is not a simple curve, it’s more like a collection of leaps and bounds interspersed (and paused) by the usual diminishing gain curves. 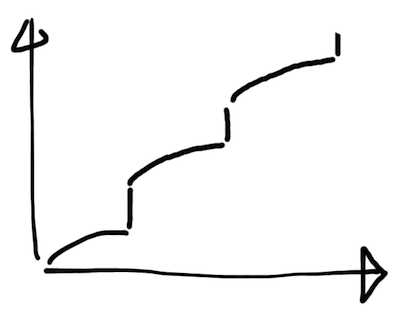 To have one of these, one has to allow for changes in what one does, to focus on effectiveness of the whole instead of efficiency of the parts. But alas, software marketers and designers are not of the brave persuasion, they would never dream of trying to change the way people go about their business. The age old “truth” of “find a need and fulfil that need” is followed without a question. Follow the customer’s lead, never risk leading, never make the move from efficiency to effectiveness.

Look closer and you’ll find that a Diminishing Return Curve is identical to a Maturity Curve, so no wonder why most agree that Business/Enterprise Software is mature. In truth it’s not, it’s just waiting for the next bound. If somebody dares.

One response to “Business Software is in need of some leaps and bounds!”