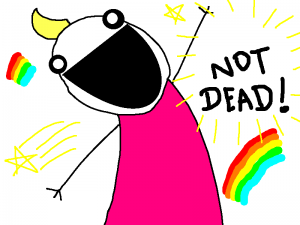 I like RightNow. I really do. I think that their CX applications and platform are genuinely very good. I think they are an innovative company that has chutzpah. Their release of the Cloud Services Agreement – a contract that can be a model for the enterprise world – is proof of that. I think that CEO Greg Gianforte is a good human being and a good CEO. I think that they had the smarts to be in the public sector way ahead of most companies – and thus have some solid traction in that space – a wise move that I wish other companies would replicate.

But, I’ll tell you what. Their messaging. Ugh.  For some reason, they frequently do things that either miss the point or just piss people off. Me among them.  While their style of messaging (forget the content for a minute), is often excused as “provocative” or “pugnacious”, it isn’t. Its just plain dumb because it actually hurts the company that’s doing it. It DOES distinguish them and if you’re of the school that thinks any publicity is good publicity, then, hey, great work.  But, really, it only reduces the respect of opinion leaders that might matter to them  (or maybe the opinions of thought leaders just don’t matter to them. That could explain it), and confuses the customers that they are attempting to distinguish themselves for.

The latest missed boat is the same ship that they fell overboard from last October. It’s best reflected in the MyCustomer.com interview with RightNow CMO Jason Middelstaedt titled, “RightNow CMO: Nobody Wants To Hear About CRM Anymore”.

Wow.  Read it and weep – for RightNow.

To summarize the article – though I think you need to read it yourself to get the full flavor – RightNow is saying that the time for CRM has passed. “We are entering a new era,” says Middelstaedt. That era of course, is one that happens to suit their rebranded platform perfectly. Honestly, I don’t begrudge RightNow’s attempt to rebrand the world the way they rebrand the company. We all want things to be the way we most benefit from.  And I have zero issues with RightNow attempting to rebrand period. Its their company, not mine.  They can do what they want.

What I do dislike quite a bit is the attempt to stuff the world into the artifice they are creating at the expense of an entire industry.  Not too collegial, that.

Let’s take a look at what was said in the MyCustomer.com interview.

“Certain terms and topics only have so much life – there is nothing you can do to re-beautify a topic that is dead,” says Jason Mittelstaedt, RightNow Technologies’ CMO. “This is the first year that Gartner is not having a CRM conference in the US. Last year the show was dead and as one of the premier sponsors we sat down with Ed [Thompson, Gartner VP and distinguished analyst] and a few of the others afterwards and told them that they were missing the boat – nobody wants to hear about CRM anymore because they have heard it all! I went to some of the sessions and these guys could have given the same presentation seven years ago. And everybody knows it. So this year they repositioned it as Customer 360 Summit and were much more aggressive with the customer experience and social piece.

The result, Mittelstaedt emphasises, was that the attendance was almost double the CRM show the year before”

My answer to that: Simply not true. The doubling of attendance had nothing to do with distancing from CRM. It had to do with emphasizing what customers wanted to hear about because they asked and finely tuning that – thanks to the extraordinarily good work of Juan Fernandez and the conference chairs.

What is true is there was more social focus at this year’s Gartner CRM conference.  Not experience – social. AND if you remember, it was Social CRM that was the focus.  Not social media, or social bladeeblah, but Social CRM.  Hard for me to forget – though apparently RightNow has – that the Social CRM Magic Quadrant was the #1 most buzzed about topic at the conference – and Social CRM was was one of the key points to Ed Thompson’s keynote.  How do I know?  I attended, I moderated a panel, I did a dialog on stage with Michael Maoz, and Gartner involved me in the planning of the conference which I am most appreciative of. And I was involved in the post mortem for this year and am helping plan next year’s. So I know.

Plus to continue on about the absurdity of this statement:  I was the chairman of and intimately involved in the planning of CRM Evolution 2010 Conference in early August run by CRM Magazine – which RightNow attended and sponsored. This becomes odd because of this revisited repeat of their rebranding effort they launched in Colorado Springs at their user conference.  There was no shying away from CRM at CRM Evolution 2010 – it was the name of the conference, the name of the magazine and the subject of everything discussed from traditional to social and from its operational capabilities to the impact of interactions on the customer experience.  All there. All encompassed under the name of CRM.  And guess what?  There were 859 people there – more than double the year before – because they embraced CRM.

Denis Pombriant, one of the CRM industry’s leading lights and most observant people made another good point:

“Its not hard to show improvement in attendance this year over last year because last year, travel budgets were slashed.”

Um, good point. Maybe there were reasons that had little to do with CRM that had something to do with the growth of attendance this year, too.

Look, I have no problem with RightNow’s focus on customer experience…