Made on the Web, designed by us

The notion of the Internet as a medium for self-expression and creativity is certainly not a new one. The Web 2.0 era has repeatedly underscored the point that when an online service successfully taps into the wellspring of global innovation that is us, the outcomes can be historic. Now traditional businesses are finding ways to take advantage of the same power.

It’s no accident that the top five sites on the Web as of this writing are Google, Yahoo, Facebook, YouTube, and Wikipedia. The vast majority of all content on the latter three services is entirely user generated, while arguably the first, Google, is merely a reflection of our own content after passing through their patented algorithm. The implication is that what we collectively create has become the most significant and popular part of the Web.

In recent years a new and slightly different take on user generated content has emerged. The growing popularity and professionalism of crowdsourcing has led to a number of online services who specialize in meeting the specific needs of businesses by enlisting their communities to tackle anyone’s challenges, usually in exchange for some form of compensation. The advantages are clear: Very low cost access to enthusiasts and experts in a given subject, broader input of new ideas, faster response to needs, and so on. The disadvantages are less so, but usually boil down to lack of control, occasionally in unsatisfactory results, and finally there are concerns about security and privacy. 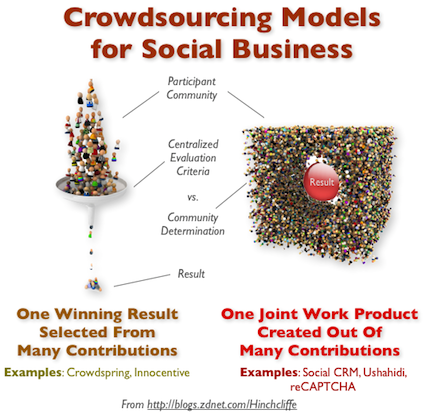 But the biggest question has been whether sourcing to the Web is a repeatable and reliable way to run a business. Can you really count on a largely unknown group of people on the Web to predictably provide you with the results you need day-to-day? While the fast growing number of crowdsourcing services (I count several new ones a week now) speaks volumes, another interesting new data point surfaced this month that shows that the wellspring might indeed be as large as required for widespread adoption. A new Forrester report issued last week says that despite half of all firms yet to use social media to drive product design, creation, or strategy, approximately “sixty-one percent of all US online adults are willing co-creators” if they are so tapped.

A majority are willing to co-create

This is a significant piece of data and if borne out shows that how we produce ideas and work in the 21st century will be very different indeed. For its part, The New York Times has been running a long series of pieces on crowdsourcing over the last year, most recently this small business guide, where a lot of the focus has been in terms of the growth and richness in co-created products and services for SMBs. This is an interesting departure from much of the use of Web 2.0 in business, which has often been dominated in recent years by the enterprise space. Large firms have often had the resources and spare capital to invest significantly in capabilities such as Enterprise 2.0 and Social CRM.

Not that the Global 2000 has eschewed crowdsourcing either. Many notable examples exist here too, particularly with well-known enterprise crowdsourcing services such as Innocentive and Ideascale. Yet an informal survey of some of the newer crowdsourcing services such as Tongal and Whinot shows that small businesses are the major customer base, if not the actual target. Almost certainly it’s because crowdsourcing offers by far the least expensive route to conduct the activities that small business are often too financially strapped to do any other way. This is part of the dramatic collapsing of traditional cost structures for many classical business activities that seems to be a hallmark of Social Business in general. For some, this will provide a major competitive advantage and associated gains, at least as long as the leaders in their sector are still using the old methods. For others, particularly late arrivals, it will no doubt become a required competency but perhaps not offer up the same disruptive potential…