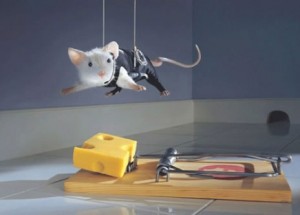 How do Bootstrappers get the word out to customers that they have a better mousetrap?

They have little money to spend and little time to invest.  Yet there are ways.  Consider my humble experiments to see what one man can do as a bootstrapper during my current jaunt between day jobs.

Let me summarize the different means by which I have attracted folks to discover my site and my product, a specialized calculator for CNC machinists:

–  Referral:  Whereby some other site links to my humble site and folks eventually find their way to my product page.  In many ways, this corresponds to what Old School marketing would’ve called PR.  On the web, PR manifests itself as people linking to your site and helping to tell your story.

–  Direct:  Whereby folks type the URL into their web browser or have kept a bookmark to it.  Heck, I don’t know how they found me.  Not all things are knowable, but we sure do try to understand those things that are tragically knowable.  This could be another form of Customer Referral, word of mouth or whatever.  Think of it as Lead Nurturing as well.  Folks keep coming back for another bite at the Knowledge Apple until they understand what you’re up to.  It sure do help to have a whole tree full of Knowledge Apples. Pass me another helping of content, Bootstrapper!

–  “Social” Referral:  Whereby I participated in some Social Web Site or another and by virtue of said participations, peeps thought they’d come check it out.  Yo!   In one case, I actually created said Social Site and only made it available to a Closed Community.  Somehow that only made peeps even more curious.  Do tell?

–  Pay Per Click:  Whereby after considerable deliberation on my financial status, I ponied up the princely sum of $30 a day for about 6 weeks to see what could be done with Google AdWords.  Yes Virginia, even a Bootstrapper can afford that potent marketing budget, perhaps by combining all Founders’ pocket change instead of throwing it into the Starbucks tip bucket.  I admit, I do consume a lot of Mochas.

At the proverbial 100,000 foot level, there are three high level conclusions I have reached after all this falderall.

First, it is possible to bootstrap considerable activity with minimal cash outlay if you have the time, the energy, and the ability to do it yourself.  Remember, Bootstraps need Starters!  If, OTOH, you have to go hire an SEO firm, a web design firm, a product marketing consultant, an outside tech writer, a photographer, a Best Boy, a Gaffer (I dunno, but I see them on movie credits a lot), a caterer specializing in wholesome organic vegan menus, and a mural painter, maybe you shouldn’t be trying to Bootstrap.

Second is that content precedes everything.  Without content, none of this would have been possible.  Even content that is presented in the fairly amateurish way mine was (hey, I’m no web designer, I did it all in my spare time in Dreamweaver and Photoshop, and it shows!) can get some pretty surprising results.  The website I used for these bootstrapping experiments is focused on the CNC machinist’s world.  That world tolerates my level of commercial fit and finish.  Others may not.  If my Bootstrappin’ gets far enough, I will seek the services of my favorite Graphic Designer (Duke, you know you want to, I just can’t afford you yet!) to “Dukify” (yes, he is the Duke of URL) things a bit.  I know looking at it today would make him blind in one eye and wish he couldn’t see out of the other.

Third, this stuff can be optimized, but if you optimize the wrong metric you will get completely useless results.   It is impossible to navigate unless you can see the whole sales funnel all the way through to your closing event.  In fact, you’ll see over the course of the Bootstrapper series, the many ways I optimized to get better results.  When I get to telling the details, you will be amazed at how often the various metrics want to fight you on doing the right thing.  Speaking of which, I’m using Google Analytics and AdWords for my metrics, just as I discussed already.  I get a lil’ help from a few other goodies and a lot of Excel analysis elbow grease (hey, I can run a spreadsheet, I invented the notebook tabs on them) that I’ll get to in the later posts.

Okay, let’s peel back the onion a layer (not much oxygen at 100,000 feet anyway) and start digging into the data to see just how much activity was bootstrapped.

In a relatively short time, acting entirely on my own (sole founder, floor sweeper, web designer, developer, executive, and court jester of the whole shew) and with minimal cash available, incorporated and deposited a check for $5000 in the company bank account (and plenty still left for more Mochas!), we (must be the Royal “We”) have accomplished the following:

– Created a thriving community of not quite 2000 machinists using the product in less than 12 months.  That community is doubling approximately every 3 months at this point.  At some point that will certainly slow down, but there is decent momentum.

– 16.4 million hits on the product’s crazy name “G-Wizard” if you search Google.  Of course that nutty DJ guy is in those results too.  I get 1.3M hits for “G-Wizard Calculator“, a little cleaner search.  For comparison, top-tier CAD/CAM vendor Gibbscam gets 277K hits and Surfcam 346K hits.  Peeps sure are talking about it.

– Gotten more traffic to the web site that some of the leading CAD/CAM vendors get to theirs.  See these Compete.com results for a comparison against Surfcam and Gibbscam.  I’m even beating #1 market leader Mastercam, well over $100M in revenue, by a whisker.

– Since most readers are probably not too familiar with the online landscape for CNC machinists, let me tell you it’s smaller more insular world than Social Software world.  Techcrunch and Mashable don’t write about it, so there isn’t much of the Echo Chamber effect to magnify your impact.  Even a relatively less noteworthy (i.e. not Google, Facebook, or Twitter) like a Xobni handily crushes my web traffic.  OTOH, I like it that way.  The Bootstrapper wants to be a Big Fish in a Small Pond and not have to compete against every Boy and his VC’s. At this stage, CNCCookbook gets just about the same traffic as PeerIndex, the last startup Fred Wilson wrote about as I write this.  I think if Fred wrote about me it might just double my traffic with one blog post, LOL.  I’ve done considerable investment-related research on Vertical SaaS Companies in the past, and noted that they tend to spend less on both R&D and Sales and Marketing to generate their revenue than broader companies like Salesforce.com.  I think that’s a beautiful thing for Bootstrapping.

–  The site actually gets quite a bit more activity than Compete.com reveals, but if you’ve ever used a service like Compete to look at your own site, you know that.  It is more of a comparative tool.  As I write this, I get about 40,000 unique visitors each month to CNCCookbook.com.

Okay, and what haven’t I accomplished?  In the spirit of full disclosure, I haven’t yet charged a single cent for the product.  It’s coming, but for now, the product is in Beta test and is free to anyone who’d like to register.  I have announced pricing in the private CNCCookbook User’s Club Community.  Kinda makes you want to register just to go check that out doesn’t it?  Hmmm, could be there’s a plan there somewhere.  Also, in the spirit of full disclosure, a good deal of CNCCookbook existed before I undertook to Bootstrap.  I was using it as a vanity blog while I was learning the CNC business.  I’d been involved with it way back in college days, but a lot had changed.  FWIW, knowing how much time I have spent on that site pretty closely, I estimate it represents about 1 Bob Year of 40 Hour a Week Time.

Can you do something similar?  I dunno, that’s why I called it a Bob Year.  I don’t even think you need that much content given what Google Analytics tells me about how it is consumed.  But I do know startups are often quiet while building a product for some months, and during that time you and all of your Bootstrappin’ Cronies had best be cranking up the Content Machine.  The other thing I know is that site is a Heck of a lot more interesting than most Corporate Web Sites because most of the time it isn’t trying so hard to sell you something.

In conclusion, I am measuring success in terms of machinists participating in the Beta test and my ability to efficiently get more to join in.  Next post, I will drill down into how successful each source of traffic has been, and what some of the most successful types of content have been.  Eventually I’ll do a post about how to evaluate ideas for a Bootstrap, but my writing has to go with what I’m thinking about when the muse strikes, so this series is kind of out-of-order.

Links to the Bootstrappa’s Paradise blog series as well as other useful resources for Bootstrappers.