NASA Fiddles While Rome Is Burning… 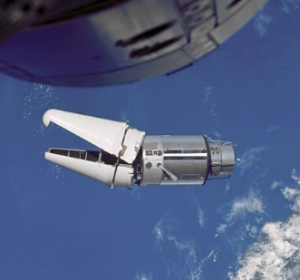 Something about the “Golly gee whiz this innovation is great” tone of Alex Howard’s article about the NASA IT Summit really rubbed me the wrong way.  It was probably that there wasn’t really innovation that had anything to do with NASA or space travel, despite NASA and Alex’s best efforts to make it seem wonderful.

Sorry, but I grew up on NASA putting men on the moon.  I vividly remember getting up at the crack of dawn with my dad to watch the Gemini missions, and the “angry alligator” incident where a docking experiment failed to come off as planned.  I was 5 at the time and fascinated.  I remember the family gathered around the TV set watching that first “big step for mankind” on the moon.  Those early space missions launched me on a career in science and engineering that I’m still pursuing today.  It never occurred to me as I was watching these historic events that this was the peak.  It would be downhill from there.

If only NASA was pursuing something remotely resembling the inspiration they once provided the world.  In February, next year, the last Shuttle mission is scheduled to be flown.  We can no longer put men on the moon.  The magnificent Saturn V rocket that lays on the ground outside the Houston Manned Spacecraft Center is just so much junk, slowly corroding away, like our dreams from that earlier time.  Soon, the idea of reusable space vehicles that would make it cheaper and more practical to go to space will also be put aside.

Now along comes today’s NASA, trying to get a little PR glory from IT technology others are working on.  Yeah, we get to hear Vinton Cerf talk about the prospects for building an Internet in space.  Nobody will be there to try to connect their iGadget to it, because NASA can barely get there anymore, but we’re going to talk it up.  We get Lewis Shepherd telling us, “Government has the ability to recognize long time lines, and then make long term investment decisions on funding of basic science.”  Yeah, we can see that based on NASA’s bright future, Lewis.  And then Gartner’s VP, David Cearley talked about Gartner’s view of what the technology trends are.  No news, nothing even remotely to do with space travel, but it’s all the latest tech don’t you know.  Gibson’s hackneyed, “The future is here today, it’s just not evenly distributed yet” is trotted out as if saying it will make it true.

What’s with these guys?  Where’s my flying car, dammit!